Skoda Kodiaq 2017 review: Not quite the value proposition

The company’s new flagship seven-seater proves that big needn’t necessarily mean crude or ungainly.
By : Autocar
| Updated on: 07 Oct 2017, 10:48 AM 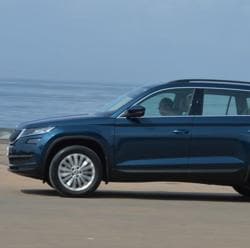 Skoda Kodiaq lacks in outright size compared to, say, a Fortuner or an Endeavour, it makes up for with contemporary styling.

We've driven the Kodiaq overseas, and when I first lay eyes on the Indian version, I'm reminded of the first thing that struck me about it the last time - the way it looks. It's not small, but it looks more compact than it is, and if you think that takes away from its SUV street presence, it doesn't. The narrow width and low height, relative to the immense length, means they had to get the ride height right to prevent it from looking too MPV-like, and it seems they have. You also get the company's 'butterfly' grille that's now bolder than ever. The details are striking - there's the sharp 'Czech crystal' headlamps and tail-lamps, with the fog lamps getting their own angular pods below. The 18-inch wheels are just about the right size. So, what it lacks in outright size compared to, say, a Fortuner or an Endeavour, it makes up for with contemporary styling.

The interior is decidedly less avant-garde, but that's not to say it's bad by any measure. It's just that it's a bit familiar now. You get the standard Skoda dials, steering wheel, stalks, window switches and air con controls, and there's the same beige and dark grey colour scheme as the other Skodas.

The climb into the middle row is easy, you get a separate third climate zone, and these 40:20:40 split seats fold down and can be slid back and forth by as much as 180mm. They do not, however, tumble forward, nor can they be removed like in the Yeti. This means access to the rear is a bit cumbersome. And it is a bit cramped back here, but by pushing the middle row halfway forward, you could actually fit seven medium-size individuals in this car.

The seats themselves are a touch firm, though they're far from uncomfortable. The front seats, with their wide range of adjustments, will hold you well, and thanks to the low dashboard, you get a good view out front even at the lowest setting. The view backward, however, isn't so great. The boot is impressive, at 270 litres with all rows up, 630 litres with the last row folded, and a massive 2,005 litres with the second row down too. It also holds a super-narrow space saver neatly packaged lower in the floor. It's absolutely loaded with equipment too. The 8.0-inch touchscreen, the same one in the new Octavia, gets Apple CarPlay, Android Auto and even an impressive proprietary navigation system. Then there's the 10-colour ambient lighting system, the nice-sounding 12-speaker Canton stereo, and even a number of graphics that show you how economically you've been driving. Skoda's also added some clever little touches, like a little dustbin in the door pocket, a magnetised flashlight you can stick on the car while you change a tyre, and my favourite - plastic 'bumpers' that pop out and protect the door edges when you open them! There's a massive panoramic sunroof and both front seats are powered with a memory function. It also has hands-free parking assist and a drowsiness sensor. I've also counted nine airbags!

Skoda already uses two different versions of the 2.0-litre four-cylinder TDI motor in India - with 143hp in the Octavia and 177hp in the Superb, and now along comes the Kodiaq with a third, even newer version. This one makes 150hp and 340Nm, and though not the highest of outputs, when I sampled it in Europe, I found it to be more than adequate. As we weave around the narrow roads near Kovalam, I can tell this motor is decently refined. The car feels very responsive at low to medium speeds. The good visibility, teamed with a light, responsive steering, and AWD means this feels exactly like a Skoda Superb to drive. At higher speeds, there's some hesitation, and it starts to feel a bit strained. The stability you get on the highway is just exquisite. Bump absorption is actually quite incredible, and only the really hairy ones make it through. On the somewhat broken roads around Kovalam, the suspension is handling things quite admirably. It genuinely feels like a sedan.

The Kodiaq doesn't feel like an SUV, and I mean that in the best way possible. It feels like a big premium car that you can take your whole family along in. The Kodiaq covers all the expected bases - long equipment list, plush interiors, space for passengers and luggage, and ride comfort. The price tag of ₹34.49 lakh (ex-showroom, India) for the sole, fully loaded 4x4 TDI DSG version, makes it more expensive than the VW Tiguan, and even the Toyota Fortuner and Ford Endeavour. That's a lot of money even though you do get a lot of car for it. So, while the Kodiaq upholds Skoda's core values of space, luxury, equipment and versatility with aplomb, it isn't quite the value proposition we hoped it would be.