The Swedish carmaker’s hatchback has all the goods to challenge the Mercedes and BMW duo, except for the badge
By : Hindustan Times
| Updated on: 17 Jul 2015, 11:58 AM 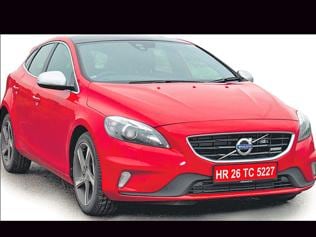 TWO YEARS ago, Swedish luxury car brand Volvo, which is perennially playing catch up with the big three German luxury brands, released the V40 crosscountry. It was no wonder that the hatchback will also come in at some point of time. It has now and is pitted against BMW 1 series and Mercedes A class.

All Volvos are delightful looking vehicles without being outrageously stylish and V40 fits that bill. It is one of the last remnants of the old design family that is now being done away with. But it isn't a handicap. Like all luxury hatches V40 is not small. At nearly 4.4 metres it measures well against the competition. It's low ground clearance of 133 mm gives it a sporty stance. The protruding snout with the mesh grille and the deep set pear shaped headlamps give it an aggressive appearance. It gets even better at the rear where the signature curved trapezoidal tail-lamp combines well with the black tinted rear glass. Even in Delhi, where there is no dearth of luxury cars, people turned to check it out more than once.

The company's penchant for the understated means this isn't the most attractive cockpit. The Mercedes A class feels a generation ahead. Yet, there is nothing that you would miss. The seats offer the best support in its class with a commanding view of the road - a key advantage. The central console has large dials that are easy to read. It has the shortest wheelbase in the segment and though that doesnt curtail rear leg room by much, it is best only for two. There is however less space in the boot but split seats come in handy.

The 2-litre turbocharged diesel engine is more powerful than the 1 series or A class. On the road, the whiff of turbo lag that manifests itself at low revs can be a tad frustrating. Especially in the city, the car accelerates inconsistently and in fits and starts. The low ground clearance means one has to be attentive on speed breakers and big potholes. On the highway, though, it is more like a BMW than the Merc and it handles corners better than most small cars on the road today. Even on rain soaked roads, there was no lack of traction. Like always, it scores brownie points on safety. The city safety features means the car would break on its own at speeds below 50 kph when it detects a chance of a collision. And if you crash at a higher speed the cur tain airbags will keep you cocooned. There is a knee airbag too for the driver as well as a pedestrian airbag for the jaywalker. If safety were the only consideration, there is no looking further than a Volvo.

The V40 strikes the right balance between the Mercedes A class and BMW 1 series among the luxury hatches. It isn't as stylish as the A or as dour as the 1 series. Because Volvos don't sell that many in India, it will turn heads while offering an engaging drive over a weekend. It will also guarantee that you are as safe as home in the car, even when you are irritable after a bad day at work. Mind you, it costs much less even though it isn't assembled here like the 1 series. What works against it is that consumers prefer a three pointed star or a blue propeller over a Volvo. But that is more about vanity than technology. Otherwise, V40 is a compelling proposition.