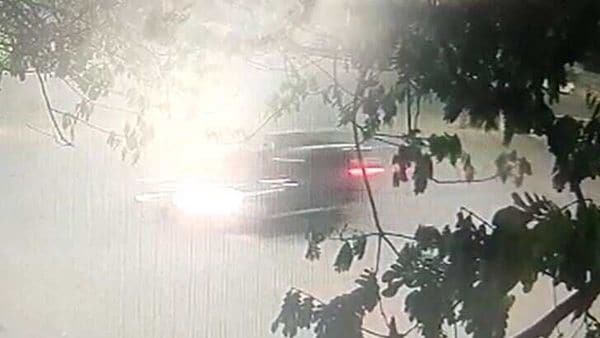 Screenshot of the sourced CCTV footage

A CCTV footage has captured a speeding black BMW car ramming into a police bike while two armed reserve police constables rode to work in Koyambedu in Chennai. The BMW hit their two-wheeler when they were taking a right turn, throwing them off the bike. The accident took place near a private school in Chennai’s Mogappair East.

The police constables were identified as B Raveendran, 32 and V Karthik, 34. Raveendran, who was riding the bike, died on the spot while the pillion rider, Karthik, succumbed to his injuries after being admitted to a government hospital, as per the police.

The driver of the BMW, 25-year-old S Amrut, has been booked by police under Section 304 (ii) of the Indian Penal Code - punishment for an act that is done with the knowledge that it is likely to cause death but without any intention to cause death. His friends were also inside the car.

Traffic investigation police inspector said that it wasn’t a case of drunk driving. “All of them (in the car), including the driver, are students who were returning home early morning from a birthday party. The driver was speeding and couldn’t control the car," the inspector said.

The BMW driver has been remanded to two weeks’ judicial custody at the Saidapet jail in the city. After the incident, city's police commissioner Mahesh Aggarwal tweeted that they ‘lost two brave hearts to reckless driving’. The tweet also mentioned that the two police constables were riding wearing helmets.

The incident takes place as India observes its first-ever National Road Safety month, which began on Monday. This is a month-long campaign to spread awareness and education about road safety measures. The campaign was inaugurated by Union Minister of Road Transport and Highways Nitin Gadkari.

Occurrence of such incidents make it all the more important for the government to spread awareness about road safety measures in order to reduce the number of fatalities and injuries.