The service has been initially rolled out for users in Bengaluru. Later, it will be expanded to other Indian cities like Hyderabad, Mumbai, and New Delhi.
By : HT Correspondent
| Updated on: 18 Oct 2019, 11:32 AM 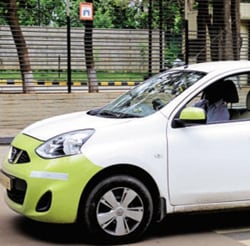 Users can choose to book a car of their choice for as little as two hours by paying a security deposit starting at INR 2000.

'Ola Drive' will appear as a new category on the Ola app. Customers can use the service for as little as 2 hours or up to 3 months.

The service has been initially rolled out for users in Bengaluru. Later, it will be expanded to other Indian cities like Hyderabad, Mumbai, and New Delhi.

"India's car-sharing market has immense potential and opportunity, which is yet to see a large-scale investment in technology and operations to make the model viable. Our expertise in serving millions of customers through a large fleet of vehicles across 250 plus cities has been instrumental in making ride-hailing a norm in India. Ola Drive has been built on the same DNA and will play a transformative role in defining India's car-sharing market in the next decade," said Arun Srinivas, Chief Sales and Marketing Officer at Ola.

With this latest offering, Ola will now compete with other private car rental services like Zoomcar, Revv and Mylescars. The cab aggregator aims to host a fleet of 20,000 cars by next year, 50% more than the fleet size of the entire industry put together.

Users can choose to book a car of their choice for as little as two hours by paying a security deposit starting at INR 2000. The new service will allow users to design their own package. Customers will be able to customise the number of hours and distance they will cover. They will also have the option to include fuel prices in their package. Ola claims such customisation will help people save up to 30% over other providers.

Cars offered under Ola Drive will come equipped with Ola's connected car platform 'Ola Play', enabled through a 7-inch touchscreen infotainment device. These cars will also include GPS, media playback, and Bluetooth connectivity. Users will also have access to the platform's support and safety features such as a 24/7 helpline, emergency button and real-time tracking. The service will also include roadside assistance, to ensure a reliable, secure and comfortable driving experience.