Officially the world\'s first production seven-seat electric car, the latest derivation of the Nissan e-NV200 is aimed equally at business users and larger families.
By : AFP
| Updated on: 09 Jun 2015, 11:42 AM 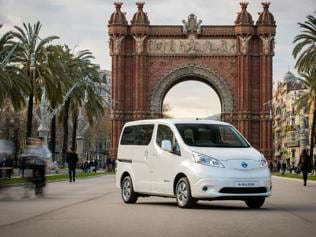 Incredibly quiet and very comfortable -- thanks to the option of specifying it with the company's highest Evalia trim levels -- yet equally practical, Nissan's latest electric car boasts a very impressive 2940 liters of luggage space when all but the driver and front passenger seats have been rolled forward, folded or stowed.

Even when all seven seats are upright and transporting people, that stowage space figure only drops to 870 litres, meaning that it has enough room for people and luggage alike on a long family break.

While it has a range of just 106 miles (170km) before it needs a recharge, the process at a rapid charging station can take as little as 30 minutes for an 80% top up.

With the Evalia option, the car comes with a reversing camera, air conditioning, cruise control, a navigation system plus Bluetooth support for a smartphone, and auto-on headlights and wipers.

And, Nissan is fully aware of the vehicle's range-based shortcomings and has been investing heavily in improving the charging infrastructure across Europe and the US as well as its native Japan, particularly in and around major cities.

Its latest contribution in this regard was in Berlin where it added new charging stations to enable more environmentally focused soccer fans to drive their electric cars to the UEFA Champions League Final, which was held in the German capital over the weekend.

As such, the car's practicality as a family transporter will grow over time, but it could already be the perfect vehicle for business use. As an increasing number of cities introduce low-emissions zones to combat air pollution, driving an electric vehicle -- whether for delivering goods or visitors, will soon be the only solution.

What's more, an emissions-free vehicle can be driven indoors as well as outdoors, presenting some very interesting opportunities for hotel architecture or for loading and unloading goods.