Petrol-powered compact SUVs are still a rare breed. With just two options in the market today, we get behind the wheel of both to judge the winner.
By : Autocar
| Updated on: 09 Dec 2017, 02:24 PM 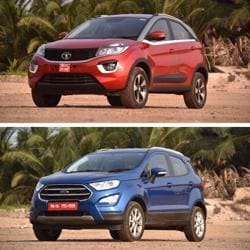 The Nexon is an all-new car and marks Tata’s debut into the compact SUV segment, while Ford has massively updated the EcoSport, the car that virtually kick-started the segment.

There's no doubt that the demand for petrol will only grow in all segments, which is why companies like Tata Motors, known for diesel vehicles, are keen to get a strong foothold in the petrol market. The Nexon we are testing here comes with the latest iteration of the Revotron engine - the all-new petrol family Tata has developed as its vanguard for the petrol market. Ford too is investing heavily in petrol power and the new EcoSport comes with Ford's state-of-the-art Dragon engine for which India will be a global production base. 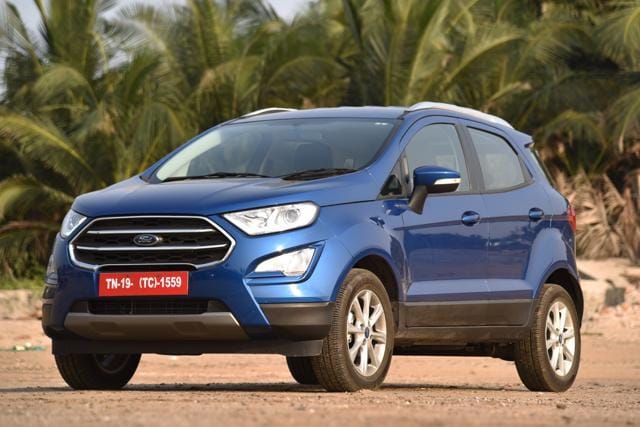 The Nexon is an all-new car and marks Tata's debut into the compact SUV segment, while Ford has massively updated the EcoSport, the car that virtually kick-started the segment. Does the new kid on the block stand a chance or can the pioneer still teach it a thing or two?

The EcoSport has a more traditional SUV stance, complete with the tailgate-mounted spare. This look is further emphasised with the hexagonal grille now shifted higher on the facelift. This upright stance has worked for Ford and they are sticking with it. Tata, on the other hand, has opted for a radical coupé-like styling, but it still screams SUV, thanks to the squat stance, the broad version of Tata's smiling grille, large wheels shrouded by massive wheel arches and a body that rides high off the ground. It's also hard to ignore the Nexon's styling elements, like the contrast roof and the ceramic-like finisher around the fog lamps, below the window line and on the tailgate. For most, it's the Nexon's concept car-like looks that will be the deciding factor.

With petrol engines, refinement is an important parameter, and, in this regard, the SUVs do not disappoint - but it's Ford's Dragon unit that's the slightly better one of the two. 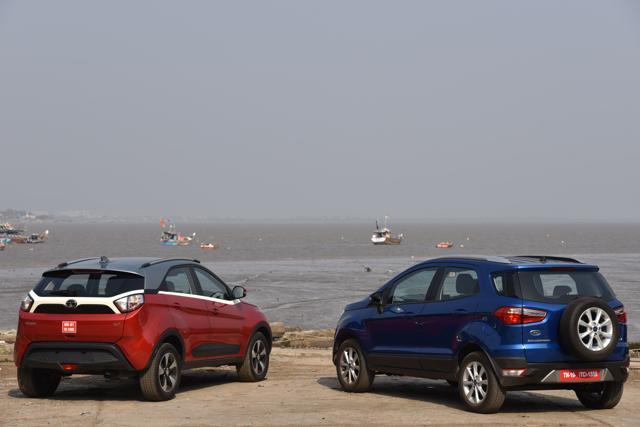 Tata is relatively new to the world of petrol and this becomes apparent when on the move. Power output is also healthy at 110hp and 170Nm. However, it is let down by its drivability. Power delivery is not as linear as its opponent, with flat spots through the range. Lifting off the throttle at lower speeds also causes a noticeable jerk. The Tata offers three selectable modes - City, Eco, and Sport. The EcoSport's Dragon engine is a well-honed unit. It's the smoother of the two and its power delivery is super. It goes about doing its job in a fuss-free manner. The dash to 100kph from standstill comes up in 12.10sec against the Nexon's 12.33sec. The EcoSport also beats the Nexon engine in the efficiency stakes, returning 10.39kpl in the city and 14.95kpl on the highway, against the latter's 9.06kpl city and 13.0kpl highway figures.

The Nexon offers a six-speed gearbox, while the EcoSport gets a five-speed unit. Fords have traditionally been the drivers' car in their segments, but it's the Nexon that takes the lead here. The Tata SUV outdoes the Ford with better grip through corners and lower body roll too. It's also got the more responsive steering and is quick enough to deliver a rewarding drive experience. As with most cars from Tata, ride quality is super and bumps are absorbed with ease. This isn't to say that the EcoSport's ride is bad; in fact, the new car is quite an improvement over the older one, but it still has a slightly harder edge to it when compared to the Nexon. 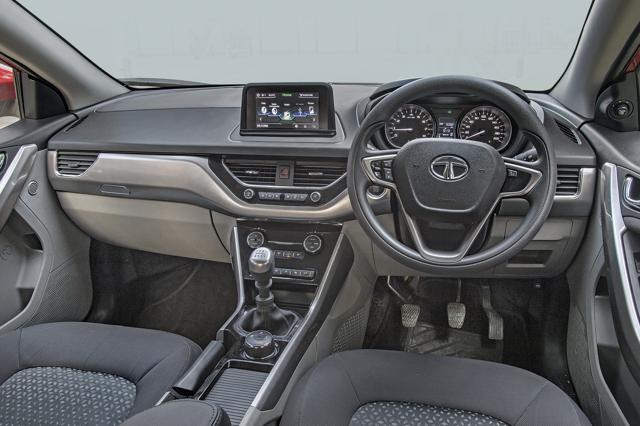 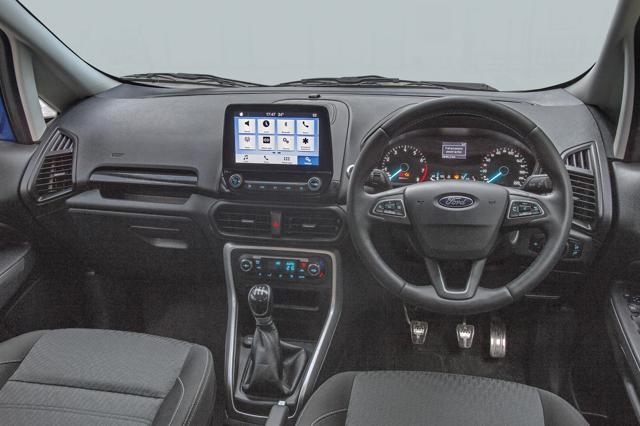 Space has always been a Tata hallmark and the Nexon lives up to that. Its coupé-like roofline isn't actually one but an effect cleverly achieved by dropping the rear window line sharply into where a rear quarter glass would reside. In reality, it's got a gently sloped roofline that allows for ample headroom; it isn't as much as the EcoSport but my 5ft 8in height had a four-finger gap to spare to the top. Thanks to its larger width, seating three abreast at the rear is pretty comfortable in the Nexon, but the EcoSport facelift carries forward its narrow width and that means its interiors aren't as spacious. If space is your priority, it's the Nexon that has a clear advantage.

However, front seating comfort tells a different story. While both cars have decent seats, it's hard to achieve an ergonomic driving position in the Tata, and the cushioning feels too firm and isn't supportive enough. The positive is that it's got the better side bolstering.

Given Tata Motors' track record, you can't help but examine the Nexon's interiors more closely, but it does impress here as the quality of materials used is excellent in most areas - the dashboard top, the knitted roof lining and the rich upholstery. There are, however, a few areas in the cabin that seem low-rent, like the blank space between the HVAC knobs and the cupholders in the centre storage bin. The Ford, on the other hand, has more uniform feel in the cabin. There are quality bits, and the buttons and knobs are well damped and easier to operate. You also get colour- selectable ambient lighting that looks cool but is limited to the front footwell. 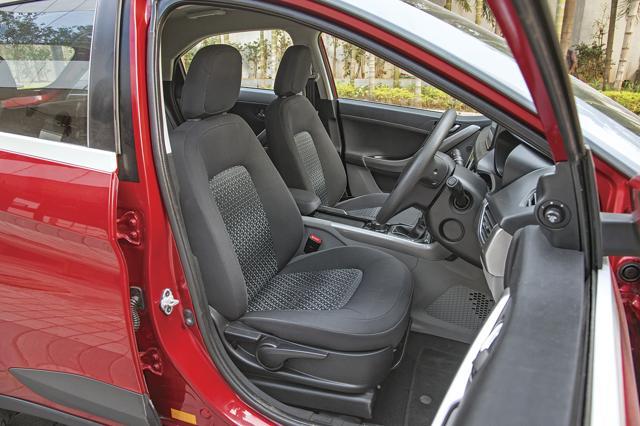 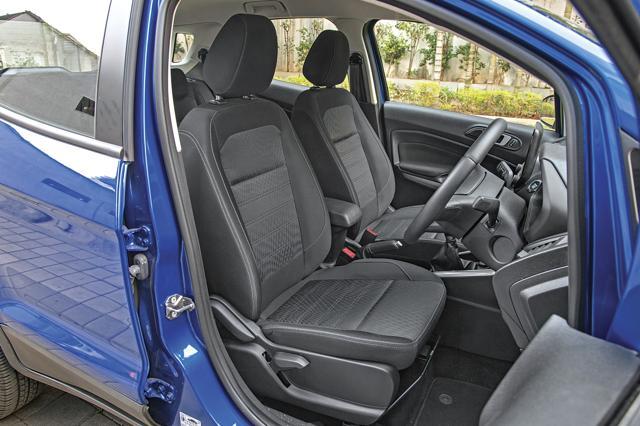 Ford has reserved the top-end Titanium + variant for the petrol-auto and diesel-manual versions. That means you lose out on a few top-end features like side and curtain airbags, electronic stability control, auto wipers and headlamps on the manual-petrol version, which is reasonable given the price difference. What is strange though is the omission of bits like a rear-view camera, glovebox illumination and flatbed-folding rear seats. Of the two, the Nexon is the slightly better model that's equipped with extra goodies like a park assist camera with dynamic guidelines, front fog lamps with cornering assist, rear air vents, umbrella holders with drainage, fully flat-folding rear seats, and a cooled and illuminated glovebox.

That apart, the EcoSport comes with all the regular features you'd expect, including Ford's new SYNC3 infotainment system and a large, floating 8.0-inch touchscreen. The system offers Apple CarPlay, Android Auto as well as MirrorLink connectivity, but even the native user interface is quite slick and well thought out. The screen also offers a better resolution and a nice glassy finish. 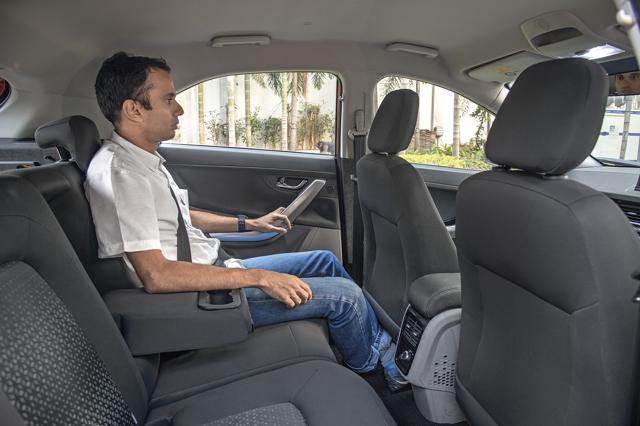 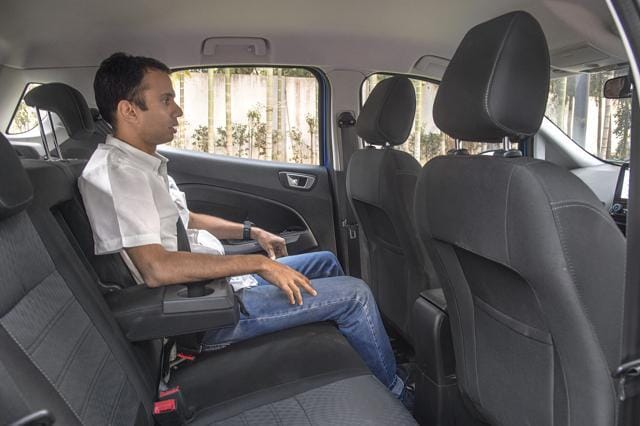 The Nexon comes with Tata's ConnectNext infotainment system by Harman and is clearly the better-sounding unit here. It also offers CarPlay and Android Auto, but at 6.5-inch, the screen is smaller in size and it also lacks the sheen of the Ford unit. The Nexon system also has smaller buttons.

With the facelift, Ford has really upped the EcoSport's game - the ride and handling has improved, and the features are what you'd expect, save for the missing rear camera. But the big improvement is the engine and it beats the Nexon by a huge margin; it's refined, offers better performance and is easily the more enjoyable one to drive. While the Tata SUV also offers better ride and handling, has more space for passengers and a few more features too. It feels unfinished and is actually flawed in its power delivery and for a car that will be primarily owner-driven, this is a big let-down. So, as it stands, the new kid on the block has quite a few things to learn.