New Audi A4: lighter and customizable

German automaker Audi has unveiled the latest generation of the A4. The family sedan, now more fuel efficient and chock full of the latest technologies, will be available for purchase before the end of the year.
By : AFP
| Updated on: 01 Jul 2015, 04:34 PM 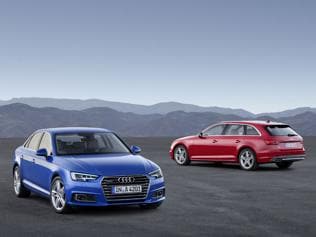 German automaker Audi has unveiled the latest generation of the A4. The family sedan, now more fuel efficient and chock full of the latest technologies, will be available for purchase before the end of the year.

The new Audi A4 uses a revised version of its predecessor's platform so that it's some 264 pounds (120 kg) lighter while being a bit bigger. Audi hasn't announced which engines will come to the United States right now, but when the new A4 launches, it'll be offered with three gasoline and four diesel engines in Europe, pushing out between 150 and 272 horsepower. The brand's most popular car already has some of the lowest CO2 emissions on the market, hovering around only 95g/km for the Audi A4 2.0 TDI ultra and 99g/km for the Audi A4 Avant 2.0 TDI ultra.

A lot of work went into improving the car's aerodynamic properties, with an evident focus on the lines that give the A4 the best drag coefficient in its class (0.23) and thus increases fuel efficiency while decreasing CO2 emissions.

As far as the interior is concerned, the 2016 A4 focuses on two innovations. The first is the optional Audi virtual cockpit, a fully digital combination instrument that features a 12.3-inch LCD screen displaying the most important information in brilliant high-resolution graphics, with great detail and sophisticated effects. The second is the MMI control concept in the center console, a newly designed feature that acts as the main control element. The top-end infotainment system, MMI Navigation plus with MMI touch and a large 8.3-inch monitor, has a touchpad in the rotary controller to zoom in and out and to enter characters.

The Audi smartphone interface is also a new feature. It integrates iOS and Android mobile phones into an environment developed especially for this purpose, the aforementioned Audi MMI. The car will also sport 'Matrix' LED headlights, a Bang & Olufsen 3D sound system and an Audi tablet as mobile rear-seat entertainment.

The luggage compartment of the new A4 Avant offers basic storage space of 505 liters, which is the most of any premium model in this class, and with the rear seats folded down, a volume of 1,510 liters is available. The electric luggage compartment cover and electric tailgate are standard equipment, and an optional extra is sensor control for opening and closing the tailgate.

Audi is promising a wide range of colors and materials for the A4 so that clients can customize their new car as they wish. One unique option is the choice of LED interior lighting packages with color-adjustable ambient lighting.

The new Audi A4 and Audi A4 Avant will begin rolling out this fall, just after the Frankfurt Auto Show, where the public will be able to get up close and personal with the car for the first time.

In 2016, the Audi A4 is also expected to be available as a hybrid working with both electricity (e-tron) and compressed natural gas (g-tron).