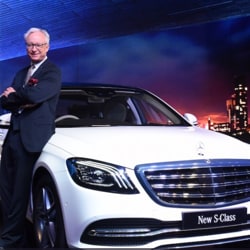 The new S-Class comes with a slew of features such as the latest generation of radar-based driving assistance systems which reduce the risk of accidents and enhance the protection of occupants as well as other road users.

Mercedes-Benz today became the first car-maker in the country to commercially launch a BS- VI-compliant car, the S Class, which is locally manufactured and available in both diesel and petrol options. The Mercedes-Benz S 350 diesel is priced at ₹1.33 crore, while the petrol version, S 450, is priced at ₹1.37 crore, the company said in New Delhi. The car was first unveiled on January 5 in Mumbai and both the variants can be run on BS-IV fuels.

While Mercedes has scored a point with this launch, two years ahead of the April 2020 deadline to go all BS-VI, its immediate rival BMW is also working on upgrading its existing BS-IV petrol models BS-VI complaint shortly.

At the recent Auto Expo, BMW India president Vikram Pawah had said that they "are working towards making our petrol portfolio BS-VI norms compliant over the next few months."

The new S-Class 350 d is fitted with a new 6-cylinder engine that is the most powerful diesel powertrain ever produced by Mercedes here, the company said, adding launch comes two years ahead of the new comes emission norms. "The new, OM 656 motor is the first BS-VI-compliant diesel engine that is capable of running on BS-IV fuel," Roland Folger, managing director and chief executive said, adding since 2013, the company has sold over 3 lakh S-Class saloons globally.

Advanced technologies used in the new S 350 d leads to a reduction of emissions significantly and is the most powerful diesel engine that the company has ever launched in the country. "The new diesel model reduces NOx emission by up to 68%, it lowers PM by a massive 82%, compared with BS-IV engines," Folger said.

It’s what every car looks up to.
The all-new Mercedes-Benz S-Class, with a legacy of leading, makes its India debut on the 26th of February, 2018. #LeadtheWorld pic.twitter.com/EiHcnhbE4a

The new S-Class comes with a slew of features such as the latest generation of radar-based driving assistance systems that reduce the risk of accidents and enhance the protection of occupants as well as other road users. It also comes with enhanced comfort options via the class-leading rear seat comfort package and high luxury, technology and entertainment system packages that enriches the passenger experience.

Folger said, "The S-Class has had a phenomenal run here already - by launching the first ever 'made-in-India, for India' BS-VI car, we have set a benchmark among the industry to help mitigate the rising pollution levels."

The inline-six cylinder motor delivers an output of 210 kW (286 hp) and the engine is also designed to comply with future emissions legislation as it consumes up to 6 per cent less fuel. The S 450 petrol variant comes with V6-cylinder that offers a 270 kW (367 hp).