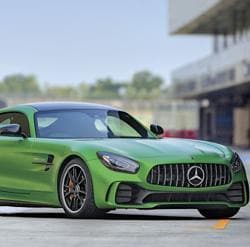 A close encounter with the Beast of the Green Hell.

Three laps of the Buddh International Circuit, that's what we've been given with the 'Beast of the Green Hell'. And as I'm rolling out of the pit lane, helmet on, hands gripping the Alcantara-wrapped wheel tightly, staring down the long bonnet, all I want is to let it loose. But the camera car in front of me begs to differ. "We'll just quickly get some shots in the bag on the first lap and then it's all yours," they promise. Sigh.

On the first lap, I use this frustrating, low-speed trudge to re-acquaint myself with the Mercedes-AMG GT. This is the R, the new, most potent and track-focused version - for now - of AMG's flagship two-seat sportscar, and it's packing a long list of upgrades from the 'regular' GT S that's already on sale here. In the cabin, however, not much has changed, and that's a good thing. There's a bit more Alcantara in place of leather, the upholstery is now all black and our test car has some nice yellow stitching and seat belts too. The seats are the same as before - seemingly thin and hard, but in reality, motorised and vastly adjustable. Sure, they are a bit snug and firm, but still a far cry from an all-out racing seat, which is what you do get in some other 'track-ready' road cars. 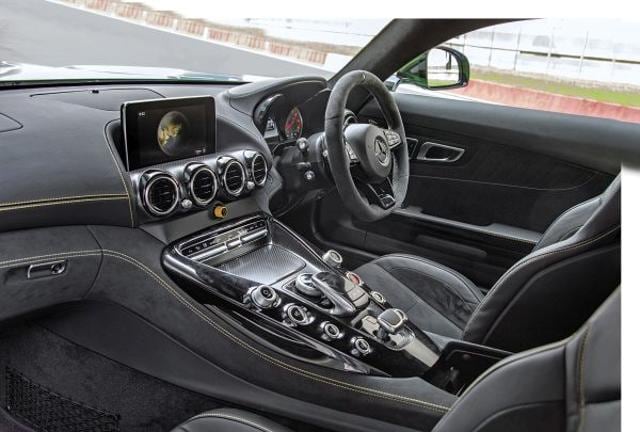 The other thing unchanged is the beautiful central console with its eight knobs arranged in a vee (representing the V8 engine); the one on the top right is for adjusting the drive modes. I've kept the car in 'Comfort' for this lap, for a gentler throttle response so that the cameras get what they want. The merest hint of acceleration past this sends a rumble through the belly of the beast, and it's safe to say that in any situation, this one is louder than the GT S. I twist the dial to 'Sport+' and dart around the final corner and onto the home straight. Now the flaps in the exhaust are open and the engine is really starting to wake up. It's a much louder, more violent sound than the GT S. Under the hood is the same 4.0-litre, twin-turbo V8 as before, but boosted to 585hp and 700Nm. The 510hp GT S was quick, but this makes it feel like a cushy muscle car in comparison. The R is supercar-quick and feels right up there with the Porsche Turbos of the world in the way it makes speed. While the dual-clutch gearbox feels nice and 'slushy' in Comfort mode, in 'Sport+' it's always got the engine raring to go. 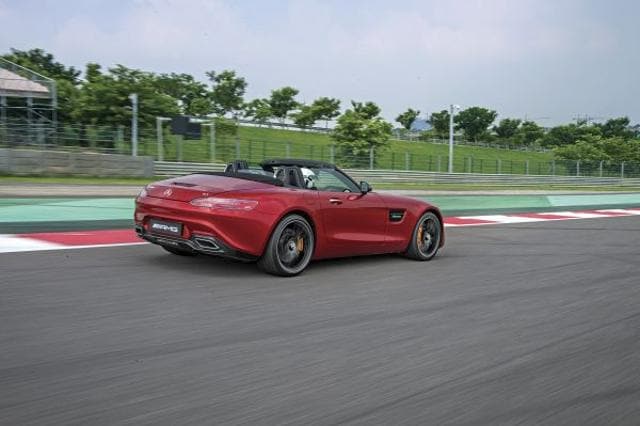 I start to realise how much more has gone into this car than just replacing the 'S' badge with an 'R'. In fact, AMG says it's basically a detuned DTM race car, rather than a jumped-up road car. So, in no particular order, here are the changes: wider front and rear tracks with swollen bodywork to match, active aero flaps at the front and in the undertray, a carbon-fibre roof, a titanium exhaust, a huge rear diffuser, active rear-wheel steering, lightweight forged alloy wheels, optional carbon-ceramic brakes, a fixed rear wing, and some ridiculously aggressive bodywork. There's also the new 'Panamericana' grille with its vertical chrome slats.

The GT R set a new lap record for production cars at this circuit, and I'm driving that very same car. Time to select Race mode on the selector and turn the ESC off. Gulp. Rear-wheel steering may annoy purists, but boy does it make a big car feel tiny; this 1.6-tonne, long-bonnet, wide-body coupé just pivots around you as it throws itself into corners. And maybe it's the wide tyres or the added downforce, but this thing just clings on to the tarmac with stoic determination. The GT S was ever-ready to break traction, but the R has so much more grip. 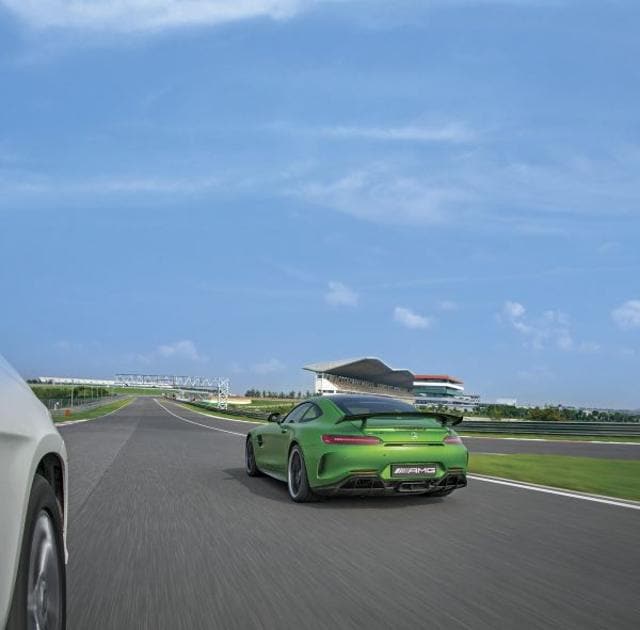 Of course, it's still an AMG, so it can still be a hooligan if you want it to be. It's simple; crank the TC knob all the way down to the red zone and summon up a big ball of bravery before flooring the accelerator hard. The 700Nm will do the rest. It can get pretty scary pretty quick, and you have got to be on your toes, or it will take a chunk out of you.

Even though our time with it was brief, the AMG GT R appears to be a beautiful blend of mile-muncher, corner-carver and all-out brute, depending on where you have the dials set. At ₹2.23 crore, it's right on the money for a super-sportscar of this level.