If any further proof were needed of the growing appeal of crossovers and SUVs among the car-buying public, Suzuki and Mazda will be providing it at this year\'s Frankfurt Motor Show.
By : AFP
| Updated on: 10 Aug 2015, 01:28 PM 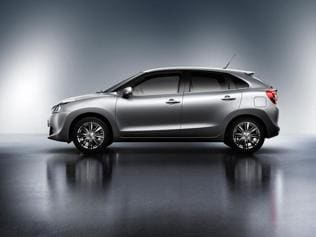 If any further proof were needed of the growing appeal of crossovers and SUVs among the car-buying public, Suzuki and Mazda will be providing it at this year's Frankfurt Motor Show.

On Friday, Suzuki confirmed that Germany is going to be the venue for the unveiling of the Baleno, a crossover-inspired compact hatchback which was tested on crowds in concept form at the Geneva Motor Show back in March.

The Japanese car maker isn't yet prepared to give too much away ahead of its official unveiling in terms of specifications but promises comfort, spaciousness and efficiency.

The Baleno will be the first car in the company's range to benefit from its newly developed 1-liter Boosterjet engine, which uses direct injection and turbocharging to provide power, but without the need for extra displacement and therefore fuel consumption.

Suzuki says that it has also focused on weight reduction in order to boost fuel efficiency.

Mazda promises its crossover concept will raise the bar. Photo:AFP

While the Baleno is a production model, Mazda, which already has a growing crossover range, will be debuting a new concept car called the Koeru.

'Koeru' means to exceed or to go beyond in Japanese and the car's aim is to push expectations in terms of what's possible in terms of styling and emotion in what is, let's face it, a highly competitive segment.

Mazda promises that the concept will 'raise the bar' for performance, efficiency and value and that it will follow the design principles of its current production cars and make use of the same weight-saving technologies and powerplant efficiencies.

All of which suggests that the Koeru is almost certainly heading for production.

SUVs and crossovers are currently dominating new vehicle sales and, according to Oliver Mitchell, whose company, Wildcat Automotive, specializes in building bespoke off-roaders and customizing Land Rovers, it's simply a question of practicality: 'These vehicles are ideal for families as they provide the space required as well as the relative compactness and fuel economy for everyday usage, so they tick many boxes for the end user.'

However, the reason why it feels like the cars are part of an invasion is simply down to time.

'SUVs and Crossovers are a fairly new phenomenon. SUVs' popularity have grown increasingly year-on-year and show steeper growth curve due to them being introduced relatively late in automotive terms,' he says.

The Frankfurt Motor Show opens its doors to the public on September 17.