The Atom electric quadricycle is expected to be powered by 15kW electric motor and lithium-ion battery pack.
By : HT Auto Desk
| Updated on: 06 Jul 2020, 09:56 PM 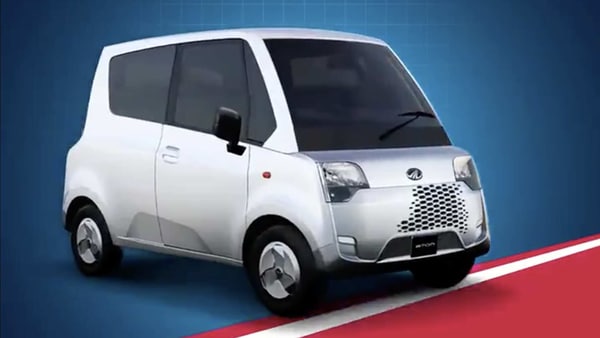 Mahindra and Mahindra has teased its upcoming electric quadricycle Atom. The 4-seater vehicle, to be marketed as an urban green last-mile connectivity vehicle, is expected to be launched some time next year.

The Atom was earlier showcased during the Auto Expo 2020 in February this year. The launch of the vehicle was expected to take place this year. But it has been postponed due to the ongoing coronavirus pandemic.

The Atom electric quadricycle is expected to be powered by 15kW electric motor and lithium-ion battery pack. The top speed of the vehicle is unlikely to exceed 60 kmph. The range of the electric vehicle is likely to be around 75 km. Atom may not have battery-swapping facility, but it can fully recharge in around four hours. charging time of about 4 hours through its 12V power outlets.

The Atom electric quadricycle has a tall stance and will come with long glass and safe enclosure. It has some interesting design elements, including clear-lens headlamps, reflector strips on the front and rear bumpers, large windshields, body color out side rear view mirrors, bold side creases, and triple-pod tail lamps. The two-door vehicle can seat three people besides the driver.

The company claims that it will get more interior space and better comfort. Also it will be easy to load the luggage in it.

The Atom will come with standard features like seat belts and air-conditioners. However, there will be no airbags or ABS safety features in the electric vehicle.

The company aims to launch the Atom as India’s most affordable electric four-wheeler. This is besides three more electric vehicles, including the eKUV100, expected to come out of the Mahindra stable soon.

The price of the Atom electric quadricycle is expected to be in the range between ₹3 and 5 lakh.