Lexus turns up the style for refreshed ES sedan 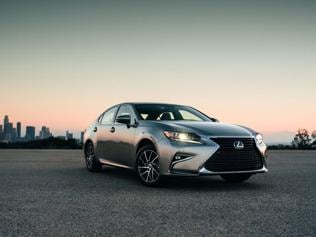 The grille and headlamps are now even more pronounced. Photo:AFP

The 2016 ES 300H and ES 350 have been endowed with significant exterior tweaks and safety tech enhancements to keep them ahead of the executive car competition.

Lexus might now do most of its business in the SUV market but the brand was created by Toyota to prove that a Japanese car company could go toe-to-toe with the Mercedes S Class or BMW 7-Series in terms of quality, performance and reliability. As the brand has expanded its model line, it hasn't forgotten it roots.

The 2016 model year ES is getting another significant update just 12 months after the last revision to keep it on potential BMW 3-series or Audi A4 owners' radars.

The front and rear have been tweaked significantly so that the radiator grille is even more prominent and headlights more pointed while the taillights and exhausts now look borderline menacing.

Inside, Lexus has added the option of piano black wood as a finish but it's the list of active safety options that will probably have the biggest pull with US clients, which is where the car is primarily marketed.

Rather than having to pick and choose, Lexus is offering a package of features that includes pre-collision braking, lane departure warning with steering assist and radar-guided cruise control.

However, two increasingly useful safety features -- blind spot monitoring and rear cross traffic alert, which scans for vehicles when reversing out of a space, for instance -- are still individual options. Still, it does come with 10 airbags, including for front passenger and driver knees, as standard.

Nevertheless, the upgrades, which also include new choices of leather finish for the seats and cabin, offer a host of premium features and finishes on what is essentially an entry-level Lexus model.

In fact the only place where it may fall down when compared with German contemporaries is in the driving dynamics department.

The model's engine choices haven't changed -- the ES 300H still offers a hybrid powertrain mating a 2.5-liter petrol engine to a battery-powered motor for a combined 200hp, while the ES 350 has a 286hp V6 under its hood. Both cars have front- rather than rear-wheel drive and power flows to those wheels via an automatic gearbox. In other words, the ES is about smooth, straight-line cruising and progress, rather than grippy roadholding in the bends.