The company has published a video purportedly showing its latest hypercar, the Aventador LP750-4 Superveloce as only the third production car in history to complete a lap of the ‘Green Hell\' in under seven minutes.
By : AFP
| Updated on: 21 May 2015, 10:25 AM 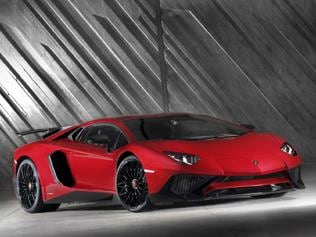 The company has published a video purportedly showing its latest hypercar, the Aventador LP750-4 Superveloce as only the third production car in history to complete a lap of the 'Green Hell' in under seven minutes.

Unveiled in March at the Geneva Motor show, the LP750-4 Superveloce is the ultimate Lamborghini Aventador in terms of power, performance, exclusivity and price tag. It produces 740bhp, can race from 0-100km/h in 2.8 seconds and onto a theoretical top speed of 217mph. However, there's nothing theoretical about the price -- $370,000 -- before even a glance at the optional extras list and a production run strictly limited to 600 examples, worldwide.

When it was presented to the public, the company described it as the 'fastest' and most 'sports-focused' production Lamborghini ever and now, if the video Lamborghini has just posted to YouTube is to be believed, those words weren't simply a sales pitch. That's because the car has just completed a lap of the Nürburgring in under 7 minutes -- 6 minutes, 59.73 seconds, to be precise, making it the third fastest production car in history to lap the infamous 12.8-mile (20.6km) circuit.

The Nürburgring, christened the 'Green Hell' by racing driver Sir Jackie Stewart because of its combination of ferocity and stunning scenery, has in recent years become almost as synonymous with supercars as paddle-shift gear boxes and bold colors. It is now the de facto proving ground for any car that has sporting aspirations and wants to be taken seriously.

The current lap record holder is the Radical SR8 LM. The tiny, barely road legal V8 racing car completed the circuit in a remarkable 6:48s but although it's fast, the car would be challenging to live with in any setting other than a circuit -- no roof, no doors, marginal ground clearance.

The same can't be said about the car in second place, the wonderfully exotic Porsche 918 Spyder. The hybrid supercar, which uses a petrol and a battery engine together as well as four wheel drive to generate 875bhp and environmentally responsible acceleration, posted a time of 6:57 seconds -- barely two seconds quicker than the Lamborghini.

One car that won't be joining the club soon is the McLaren P1. Despite extensive testing on the track and purportedly completing a circuit in a remarkable 6:47s, the company has decided against publishing or officially verifying its time for fear that the competition it inspires could lead to a potentially fatal accident.