Innovative Audi, Volkswagen and Skoda concepts to debut at Wörthersee

A major event for European car tuning enthusiasts, the annual festival in Wörthersee is also a venue where the brands in the Volkswagen group show off their most extravagant concepts.
By : AFP
| Updated on: 14 May 2015, 12:38 PM 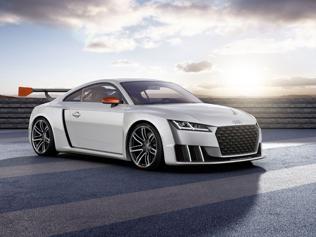 A major event for European car tuning enthusiasts, the annual festival in Wörthersee is also a venue where the brands in the Volkswagen group show off their most extravagant concepts. There will be plenty of these at the 34th edition, which is set to take place from May 13 to 16 in Reifnitz, Austria.

One of the stars at Wörthersee this year is sure to be the Audi TT Clubsport Turbo concept, a tribute to the 1989 Audi 90 quattro IMSA GTO. This prototype is equipped with a 600hp engine and a 6-speed transmission, enabling a top speed of 310km/h and 0 to 100km/h acceleration in 3.6 seconds. The model also stands out for its manually adjustable rear wing, a feature taken directly from Audi Sport TT Cup race cars. Just as sporty as the outside, the interior features a roll bar and bucket seats with four-point harnesses.

The festival will also see the official presentation of the Volkswagen 2015 GTI Supersport with 503hp. Initially developed for the virtual concept gallery in the video game 'Gran Turismo 6,' the high-performance car is said to have a top speed of over 300km/h and 0 to 100km/h acceleration in 3.6 seconds. Available in digital form in the video game, the GTI Supersport is expected to appear for the first time as a tangible model at Wörthersee. In other VW news, the tuning specialist Oettinger is slated to reveal a mysterious and ultra-powerful Golf 500R at the meet.

Apprentice designs in the spotlight

Historically, Wörthersee has also served as a showcase for projects prepared by car makers' apprentices and interns. Volkswagen will honor this tradition by unveiling a Golf GTI Clubsport with an aggressive exterior design and a 2.0-liter TFSI engine with 265hp.

The Austrian festival will also feature a contribution from Skoda apprentices: the FUNstar, a flatbed truck based on the Fabia. Powered by a 1.2-liter TSI engine with 120hp, the model includes a 1400W audio system. Skoda is also expected to unveil the Fabia R5 Combi, a station wagon based on the latest Fabia F5 rally car.

Backed by Volkswagen, the festival in Wörthersee attracts around 200,000 car tuning fans annually and features models from all the German group's brands.