Hyundai suspends China plant for a week amid political spat

South Korea’s Hyundai Motor has suspended production at one of its Chinese factories for a week, a media report said on Sunday, fuelling concern that a diplomatic standoff may be hurting sales in the automaker’s top market.
By : Reuters, Seoul
| Updated on: 27 Mar 2017, 10:15 AM 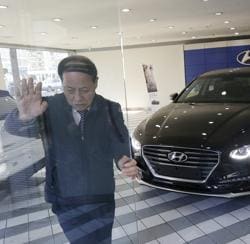 A worker opens the door to bring Hyundai Motor Co.'s Grandeur out to put it on display for sale, at its showroom in Seoul, South Korea.

South Korea's Hyundai Motor has suspended production at one of its Chinese factories for a week, a media report said on Sunday, fuelling concern that a diplomatic standoff may be hurting sales in the automaker's top market.

South Korean companies, from cosmetics firms to retailers, say they are being targeted in China because of Beijing's objections to a planned deployment of the U.S. Terminal High Altitude Area Defence (THAAD) system in South Korea. China worries the system's powerful radar can penetrate its territory.

News of Hyundai's China plant closure, reported by online media ChosunBiz, drove shares of the company down as much as 3 percent on Monday. At 0400 GMT, the shares had recovered to trade down 1.5 percent.

ChosunBiz reported Hyundai's China joint venture had told suppliers it would idle the factory in Cangzhou, Hebei Province from March 24 to April 1, to check its production line. The move comes less than six months after the plant started operations.

Hyundai has three other factories in China. No further details were available.

A Hyundai spokesperson did not have immediate comments, but industry officials and analysts say the suspension may be aimed at bringing down inventories given slowing sales in China, due to political tension and competition from local players.

Ko Tae-bong, an analyst at Hi Investment & Securities, said Hyundai's March sales in China may have fallen year-on-year due to the political spat, after gaining in January and February.

Hyundai officials have previously said the company's business ties with Chinese companies mean they were less likely to be the main target of any punishment.

The company's China operations are a 50-50 joint venture with state-owned Beijing Automotive.