Korean auto major Hyundai is gearing up to strengthen its line-up of sports utility vehicles in India with a new model, Creta, which is slated for rollout in the second half of this year.
By : Hindustan Times
| Updated on: 05 Jun 2015, 03:01 AM 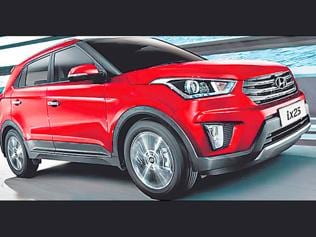 Korean auto major Hyundai on Tuesday revealed the name of its upcoming compact sports utility vehicle — Creta, which would be launched globally in India by the end of next month and exported to other countries.

Based on ix25 which is currently sold in China, the car would be sold across the world with the new name. Hyundai is targeting leadership in the compact SUV segment, one of the fastest growing auto segments in India during the last two years, competing against models such as Renault Duster, Nissan Terrano and Ford EcoSport.

"There are limited models in the segment. Given our strength in product and distribution network, we are looking at Creta for expanding the segment and becoming the dominant player," said Rakesh Srivastava, senior vice-president, Hyundai Motor India Ltd. "It will be exported from here only after we satisfy domestic demand."

Hyundai has not revealed its full global plans for the Creta. It is understood that other than India and China, it is likely to be manufactured in Russia and Brazil in the future. Though it lacks an all-wheel drive (that Duster has), Creta will be the first SUV from Hyundai at less than ₹ 10 lakh. Its launch will almost coincide with that of the S-Cross, Maruti Suzuki's first launch in this category.

"You can expect any segment to expand and become entirely something else when top two companies venture into it," Srivastava added.