Hyundai has a stranglehold on the premium compact segment, but the Japanese car has enough wares to trouble Elite i20
By : Hindustan Times
| Updated on: 10 Jul 2015, 12:00 PM 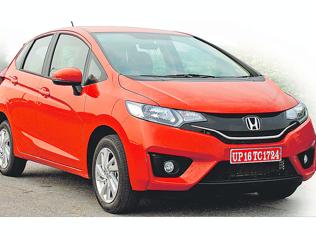 The Jazz: Good looking, but not as dramatic as Elite i20

The Japanese company is on a roll with at least two blockbuster successes — Amaze and new City — in the last two years and a potential success with the Jazz could create a template on how to revive a car's fortunes in India. As it stands, barring a Fluidic Verna, there is no car that has had a successful comeback. Will a smarter demeanour, Honda's equity and a diesel heart be enough to trouble Elite i20 hold on the segment?

The Jazz is the first major challenge to Hyundai's dominance in the premium hatchback segment and Elite i20 owes a large part of its success to its design. Given that Jazz is essentially a City without a boot, and given the company's penchant for the understated, Jazz isn't as dramatic as the i20.

Compared to the older version, the new Jazz gets sharper wraparound headlamps and a sleeker grille. The use of chrome is minimal and makes the front look better than the City. It retains its overall stance and shape from the older version though it is marginally bigger (55mm). The pronounced spoiler at the rear with the embedded brake lights and sharp creases give it a sporty look.

In 2008 too, the cockpit of the Jazz was very revolutionary and futuristic. The new car takes the trend forward with touch-screen infotainment and air-condition controls. The base variants get a black and beige theme while the top end is all black. The cabin itself is very spacious, with the increase in length culminating more knee room all around. The top-end version also gets magic seats that can be folded in numerous ways to store luggage. At 345 litres, the boot itself is very spacious. Honda has not been as generous on features though as rear AC vents and key-less ignition are missing. Yet, the large glass area gives Jazz an airy feel that is lacking on all other premium compact cars.

Honda's 1.5-litre diesel engine finally gives us a Jazz in a diesel avatar while the good old 1.2-litre petrol remains, which is the pick between the two. It is sprightly and offers linear acceleration through the whole power band. It is also supremely refined. The same can't be said about the diesel which remains noisy like the City. It has a terrific mid-range that allows easy driving in city but does not have a high top-end. On the highway you would prefer the i20 diesel.

Unlike in 2008, Honda has priced the car very aggressively by their standards. Yet, it is a bit disappointing that safety is no longer standard on this car. The two base variants don't have airbags. The petrol Jazz is a serious candidate and offers unmatched driveability, refinement and value for money. The noisy diesel is where Honda loses out somewhat to Hyundai. A mileage claim of 27.3 kpl will not stand the test on the road, but if driven reasonably it will still give you 21 kpl which is at least two kilometers more than the i20. As far as diesel is concerned it's your call on whether to take the higher mileage of the Jazz or the better overall package of the Hyundai.