Honda drives into the future with new Accord, Silicon Valley R&D center

To mark the official opening of a new facility aimed at harnessing the latest technological breakthroughs for automotive use, Honda took the wraps off its new Accord and offered a preview of some of the high-tech functions and features that could be standard fare in mass-market cars.
By : AFP
| Updated on: 27 Jul 2015, 12:12 PM 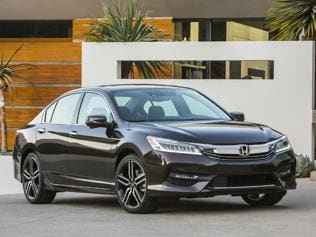 The car was unveiled at the new R&D center. Photo:AFP

To mark the official opening of a new facility aimed at harnessing the latest technological breakthroughs for automotive use, Honda took the wraps off its new Accord and offered a preview of some of the high-tech functions and features that could be standard fare in mass-market cars.

Honda, like a number of leading car companies from Mercedes-Benz to Nissan, already has a presence in Silicon Valley, but the new R&D facility will see things move into high gear.

'As an industry, we are on the verge of some major transformational changes brought on by the convergence of what have been, to this point, largely disparate technology disciplines,' said Honda R&D Americas President, Frank Paluch. 'Honda will embrace and help lead this convergence. Our operations in Silicon Valley are a testimony to our focus on this new direction in our product and technology development efforts.'

Honda used the occasion to showcase the 2016 model year Accord, a car the company claims is the most technologically advanced Accord in history. As well as looking sharper, sportier and boasting a number of features such as front and rear parking sensors as standard kit, it is the first mass-market car to hit the road with support for both Google's Android Auto and Apple's CarPlay smartphone connectivity and infotainment systems.

'Where else to introduce the most technologically advanced midsize sedan, the 2016 Accord, than in Silicon Valley,' said John Mendel, executive vice president of the Automobile Division, American Honda Motor Co., Inc. 'Customers want their vehicles to be more intelligently integrated with their smartphone-powered lives, and we are committed to delivering that experience starting with Accord.'

The Accord will also be offered with Honda Sensing, a bundled package of active safety and driver assistance features including lane keeping assist and lane departure warning, collision mitigation braking and adaptive cruise control.

Alongside the new car, Honda outlined its plans for Honda Xcelerator -- an initiative at the center that will be charged with turning tech advancements into real-world automotive features and services and one that will have loose ties with the tech companies that call Silicon Valley home.

It also demonstrated a new system under development that can identify pedestrian and cyclist movement from significant distances, expected come to next-generation Honda cars, as well as an interesting take on rear seat entertainment.

Rather than stare at a screen integrated into the back of the front seat, rear-seat passengers use virtual reality headsets for an immersive experience that can move, change and develop in sync with the car's movements