Home Auto News Heading To Auto Expo? The 'don't Miss' Guide To Where Top Cars And Bikes Are At

Heading to Auto Expo? The 'don't miss' guide to where top cars and bikes are at

Auto Expo 2020 has a slew of electric vehicles on display.A number of popular models like new Creta, Brezza 2020 and even luxury vehicles are on show.A selfie point and free test rides are key attractions.
By : Amit Chaturvedi
| Updated on: 07 Feb 2020, 12:31 PM 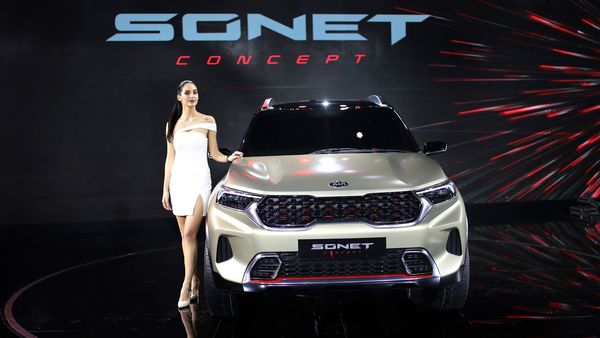 A model poses next to KIA Sonet car at the Auto Expo in Greater Noida, near New Delhi.

GREATER NOIDA : Auto Expo 2020 officially opens for public on Friday (January 7), and will go on till January 12. Though some leading carmakers have given it a miss, auto enthusiasts can still feast their eyes on the exciting line-up of cars and two-wheelers which are set to dazzle them in coming months.

Maruti, India's largest carmaker, has unveiled the petrol variant of its most-loves compact SUV, the Brezza. Launched in India in 2016, it was available only in diesel variant so far. The all-new Brezza gets a refreshed look from the outside and a makeover from the inside to appeal to the young customers, who the company says, are its target area. The new 1.5-litre petrol engine is more powerful and sleek, LED light on the outside gives Brezza a masculine, yet sporty look. The company has also kept its concept car Futuro-e, which highlights its plans for the future. A new Swift hybrid is also on the display, along with Maruti's other popular models. Head to Hall Number 9.

South Korean carmaker Hyundai too has a slew of cars at the Auto Expo to entice potential buyers. The highlight, of course, is the all-new Creta, which is a refreshed version of its best-selling SUV in India. The company has also unveiled the new Tucson for the lovers of the brand. Hyundai has also displayed the Kona electric and other future-ready cars, as part of its thrust to capitalise on the technology of the future. A hydrogen fuel cell car Nexo is also on the display, and so is customer experience booth and 4D theatre. Head to Hall Number 3.

Tata Motors has some interesting cars on display at the Auto Expo, which will surely attract eyeballs. Among them is the Sierra, its concept car to woo car lovers. Apart from Sierra, Tata pavilion also has the Nexon EV (electric vehicles are the flavour of the season), Tiago, Tigor and other popular models on display. The centre of attraction is Gravitas, Tata's new car based on the Harrier platform to rival Jeep Compass and Innova. Head to Hall Number 14.

Kia Motors, the South Korea brand which entered India a few months ago, has gone all-out to give the visitors an idea of its plans for thr market here. Apart from its popular cars like Seltos and new entrant Sonet (which will take on Maruti's Brezza), the company has showcased a full line-up of MPV Carnival, its answer to segment leader, Toyota Innova. The top variant of Carnival (Limousine) has a luggage carrier on its roof and can accommodate nine people. Head to Hall Number 7.

For those who love life in the fast lane, there is Mercedes, which has launched AMG GT 63S in India. The car is displayed at its pavilion at the Auto Expo. However, a price tag of ₹2.4 crore is surely going to dash the hopes of many who want to own the luxurious brand. The company has also kept the V-Class Marco Polo, which claims to be an opulent home away from home - complete with a fold-away bed, a kitchenette and several cabinets. Head to Hall Number 15.

For those who love two-wheelers, there are many drool-worthy mean machines. From a humble line-up of scooters and bikes from Suzuki, Hero Electric, Italy's Piaggio and Japanese brand Okinawa, to Hayabusa, the visitors will surely get a rush of adrenaline. Piaggio has launched the SRX160 scooter, which has many firsts to its name - the connectivity feature (through phone) takes a leap forward and allows the rider to see the SMS (and have them read out aloud), take phone calls (company showcased an office-goer attending meeting on conference call) and play music from the phone. Suzuki has showcased its Gixxer line-up including the 250 SF and is also giving a test ride (in front of Hall Number 1). Hayabusa, meanwhile, stands out among the crowd with its 1300-cc engine and sizzling red and blue colours. Head to Hall Number 12 to experience products from all these companies.

Then there is Cartist, India's first automobile art platform, which has displayed its products at the Auto Expo. The main mission of Jaipur-based company is zero-waste, upcycle, sustainable, recycle, reuse. A food court and selfie point are also there.