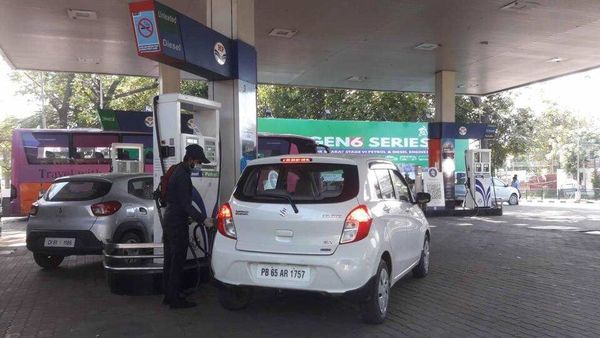 Petrol and diesel prices have been hiked for the third straight day on May 6. (File photo)

There seems to be no respite for consumers as the price of petrol and diesel have gone up for the third straight day across the country. After two nominal hikes in the last two days, the oil companies have increase petrol price by 25 paise per litre and diesel by 30 paise per litre on Thursday.

The scale of hike has been bigger each day. On Tuesday, petrol and diesel prices were increased by 15 paise and 18 paise per litre. Yesterday, oil companies increased price of a litre petrol by 19 paise, while the price of diesel went up by 21 paise for every litre.

Today's hike has taken petrol price in Mumbai closer to the Rs-100-per-litre mark. Diesel price too is inching closer to the Rs-90-per litre mark in the city. From today, Mumbai will have to pay ₹ ₹97.34 for a litre of petrol and a similar amount of diesel will cost ₹88.49.

In Delhi, the latest hike has taken petrol price to almost ₹91 per litre. The revised price of petrol in the national capital today is ₹90.99 per litre and the new price for diesel will be ₹81.42 per litre.

Fuel prices have largely remained constant since March 24, barring a couple of marginal reductions, till May 3. Incidentally, on May 2, India saw the end of assembly elections in five states which had begun in the last week of March. In fact, the fuel price revision was put on hold by oil companies for about 18 days before the first hike a day after the poll results were announced.

However, the scenario was completely different prior to March 24. India saw a spate of hikes in fuel prices since the beginning of the year. Since January, fuel prices had shot up to record level after it was hiked on 26 occasions. These hikes had shot up petrol price by ₹7.46 per litre and diesel price by ₹7.60 a litre.