With its focus on automotive exotica and the iconic hillclmb circuit, it is easy to forget that the Goodwood Festival of Speed, which this year opens its doors to the public on June 25, is also one of Europe\'s greatest showcases for extreme two wheel action.
By : AFP
| Updated on: 15 Jun 2015, 10:59 AM 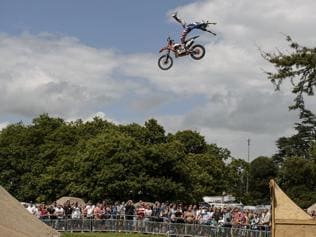 With its focus on automotive exotica and the iconic hillclmb circuit, it is easy to forget that the Goodwood Festival of Speed, which this year opens its doors to the public on June 25, is also one of Europe's greatest showcases for extreme two wheel action.

Goodwood has confirmed the line-up for this year's Goodwood Action Sports (GAS) Arena and the star attraction is set to be Petr Pilat. The Czech Freestyle Motocross (FMX) rider is universally considered one of the world's best. How good? In 2005 he became the youngest FMX rider in history to have pulled a backflip at an event. He was just 14.

After wowing the crowds at Goodwood in 2014, he's been approached to headline again. 'Last year at GAS we had such an awesome time great weather; great people and such an unbelievable event...I am stoked to be invited back,' said Pilat.

Pilat will be performing alongside Jamie Squibb, Steve Sommerfeld, Lukas Weiss and, Lucas Ackerman, who stole Pilat's record. In 2010 he was just 12 years old when he first pulled a backflip for the crowds.

For those that prefer peddle power to horsepower, the GAS BMX dirt jumping and flatland courses are returning for 2015 and this time the tracks will be dual lane for head-to-head action.

The event organizers claim that this year's list of competitors is the strongest since BMXs first officially came to Goodwood in 2011 and include former world champion Kye Forte, while legendary US rider Chris Doyle is fresh from nabbing a bronze at the Austin X Games earlier in June. They'll be joined by Anthony Napolitan, Ben Wallace, Harry Main, Tom Justice, Leo Forte and Matt Roe.

To get spectators at the show and those at home following live web streams, even closer to the action, this year's event will see a number of competitors hit the track wearing action cameras provided by TomTom.

The Goodwood Festival of Speed has been held every year since its inception in 1993 in the grounds of the Goodwood estate in West Sussex, England. This year's event runs from June 25-28 and alongside the GAS Arena will play host to a moving motor show, a concours d'elegance, a full rally stage, and a supercar paddock.