GM to shut Gujarat plant but not Chevrolet India, new Beat launch in May

The new Beat is slated to launch in May, besides a sports hatch Beat Activ and a compact sedan Essentia.
By : Hindustan Times, New Delhi
| Updated on: 28 Apr 2017, 03:19 PM 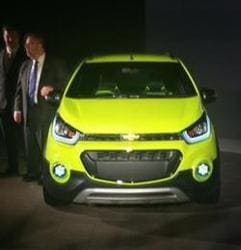 The new Beat is expected to launch in May, besides a sports hatch Beat Activ (pictured above) and a compact sedan Essentia.

General Motors will shut operations at its Halol plant near Vadodara on Friday, after 21 years of production of various models such as the Opel Astra, Corsa initially until 2003, and then Chevrolet Beat, Enjoy and Tavera.

The closure of Halol plant is part of GM India's restructuring as it seeks to consolidate manufacturing at Talegaon plant near Pune, which has annual production capacity of 1,70,000.

"The consolidation of manufacturing at our Talegaon facility is an important milestone for GM India," GM India president and MD Kaher Kazem in a statement on Friday. "GM India is very grateful for the continued support of the government of Gujarat throughout our time manufacturing at Halol and through this period of transition."

"After this restructuring is over, General Motors will roll out more models starting as early as next month," an industry source in the know, on conditions of anonymity. "The new Beat is coming most likely by next month," the source added.

From the first pics, the new Beat looks much different from the international model Spark. The headlamps get sleeker, grille gets smaller yet better, but the overall tall-boy hatch remains intact.

At the 2016 Delhi Auto Expo, Chevrolet showcased a sports concept hatchback called Beat Activ, another Beat-based compact sedan Essentia and an MPV called Spin. The company even flexed muscles at the auto show with its global icons Corvette and Camaro, besides a pick-up truck Colorado.

However, the launches of new Beat and Essentia were delayed until 2017 for the restructuring. Soon after the Beat launch next month, Essentia is likely to be launched later this year in the compact sedan segment.

The American group entered India in 1995 in partnership with Hindustan Motors, makers of the phased-out Ambassador, to sell the Opel brand in India. After some initial success with the Corsa and Astra, Opel lost appeal as more global brands entered the country.

Chevrolet saw some success with the hatchback Beat, premium sedan Cruze and its multi-purpose vehicle Tavera as Toyota Qualis left the road. But other models like the Sail, Aveo, MPV Enjoy and sport-utility vehicles Captiva and Trailblazer saw little or no success.

After GM CEO Mary Barra's visit to India in 2015, General Motors last year pulled back its $1 billion investment in India and decided to consolidate its production at the Talegaon plant.