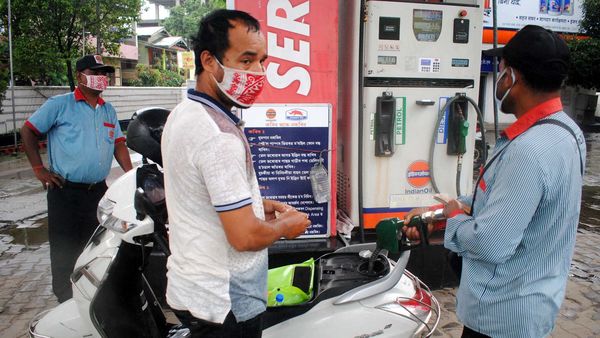 An employee adds fuel in a scooty, at a petrol pump, in Guwahati on Saturday. (ANI Photo)

In the 16th consecutive hike in as many days, petrol price today (Monday) was hiked by 33 paise per litre and diesel by 58 paise, taking retail rates of fuel prices to a record high.

Fuel prices have been shooting up each day since oil companies resumed daily price revisions after an 83-day hiatus period in order to cut down their losses. In 16 days, petrol has risen by ₹8.3 per litre and diesel by ₹9.46 per litre. This is a record increase in rates of fuel in any fortnight since pricing was deregulated in April 2002.

The increase in fuel prices since June 7 is the highest in any fortnight. When petrol and diesel pricing was deregulated in April 2002, oil companies revised rates every fortnight in line with the cost. They switched to daily price revision in May 2017 to allow cost to reflect instantaneously in retail rates.

Earlier, the maximum price increase in any fortnight has been ₹4 to ₹5 per litre, according to pricing data. However, the current price revision by oil companies has taken diesel prices to fresh highs. Petrol price too is at a two-year high.

Taxes on petrol and diesel are key revenue generation sources for governments and a cut back is not in the offing because while oil marketing companies are looking at cutting back on losses, governments are attempting to emerge from fall in revenue generation because of the national lockdown. Sources had revealed earlier this month that the daily revisions could ensure prices maintain northward trajectory till at least end of June.