In the biggest ever car recall in India, US car major Ford India has initiated a premptive inspection of 131,922 cars for possible defect and a replacement of power steering hose in additional 34,099 cars that may result in fire in extreme cases.
By : Hindustan Times
| Updated on: 14 Sep 2013, 09:03 AM

In the biggest ever car recall in India, US car major Ford India has initiated a premptive inspection of the rear axle of 131,922 cars for possible defect that may result in unstable ride, handling and braking, and a replacement of power steering hose in additional 34,099 cars that may result in fire in extreme cases.


The recall covers two of Ford's largest selling cars in the country, the Figo and the Fiesta sedan, and is an extension of a similar recall for both the cars across 127,655 units in December last year.

The older version of the Fiesta is now sold in India as the Ford Classic. The company has written to its customers asking them to bring their vehicles to the nearest dealership for inspection. There will be no charge for the procedure. 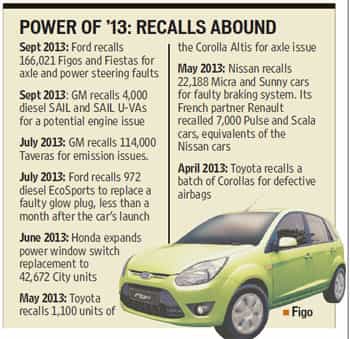 This is the eighth major car recall in India this year - already the most in any single year in the country. In July, General Motors had recalled 114,000 units of its multi utility vehicle Tavera, and also recalled 4,000 units of the Sail sedan and U-VA small car earlier this month.

In the case of 131,922 Figos and Fiestas produced between January 2011 and June 2012, Ford will inspect the rear twist beam, a part of the rear axle, and replace them if there is a defect.

The other 34,099 units of the two cars produced in batches between January 2010-August 2010 and March 2011-November 2011, covers only petrol variants of the cars and will undergo outright replacement of the power steering hose.

'Ford India is extending its existing voluntary Field Service Action (FSA) and will recall the remaining batches of Ford Figo and Ford Classic models,' the company said on Friday. 'Ford India will continue to drive this service initiative through its authorised dealers.'

Ford said no injuries have been reported due to these problems so far.