The airbags of the car failed to open during a head- on collision with a container truck in 2006 in which managing director of electrical company ‘Crompton Greaves’ was injured.
By : Press Trust of India, New Delhi
| Updated on: 17 Nov 2017, 09:32 PM 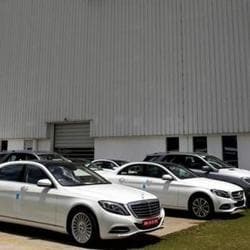 Different car models of Mercedes-Benz are parked at the company's vehicle assembly plant in Chakan, outside Pune.

The Supreme Court on Friday directed luxury car maker Mercedes Benz India to deposit ₹10 lakh with its registry as one of it's car on having met with an accident failed to trigger airbags.

The airbags of the car failed to open during a head- on collision with a container truck in 2006 in which managing director of electrical company 'Crompton Greaves', who was travelling from Nasik to Mumbai after completing his official trip, was injured.

A bench of Chief Justice Dipak Misra and justices AM Khanwilkar and DY Chandrachud said that the luxury car maker has to deposit the amount with the registry as directed by the National Consumer Disputes Redressal Commission (NCDRC) on September 11.

It also issued notice on the plea of Mercedes Benz India which has challenged the order of the NCDRC and sought the response of the electrical company.

Senior advocate P Chidambaram, appearing for the car firm, said that the NCDRC could not have passed this order as the vehicle was purchased for commercial purpose and the company (Crompton Greaves) could not claim to be a consumer in this case.

He said that conflicting judgements have ben passed by the NCDRC and it had erred in passing this verdict.

Advocate Amir Z Singh, appearing for the electrical company, said that this was a settled case and there is an apex court verdict in this regard.

He said that the car was bought for the personal use of the managing director and was occassionaly used for the official purpose and, therefore, it could be said as commercial transaction.

The apex consumer commission on September 11 had directed Mercedes Benz India and its authorised distributer Daimler Chrysler India to pay over ₹10 lakh to the owner of a Mercedes car, holding them guilty of unfair trade practice.

It had asked the German car maker to pay ₹10.25 lakh to C G Power and Industrial Solutions Limited, also known as Crompton Greaves, the owner of the vehicle.

Sudhir M Trehan, the managing mirector 'Crompton Greaves', had met with an accident while riding an E 240 car, one of the models launched in 2002, on account of faulty frontal airbags.

The commission had also directed the global automobile manufacturer to provide adequate information on the deployment or triggering of the airbags of the vehicle in consultation with the Automobile Association of Upper India (AAUI) in the owner's manual and its website.

It had asked the car maker to pay sum of ₹5 lakh to the owner firm for the deficiency in the services rendered to it on account of the airbags of the car having not deployed or triggered.

It also awarded ₹5 lakh to the company, which owned the car, for the unfair trade practice indulged into by the vehicle maker and ₹25,000 as cost of litigation.

According to the compliant, C G Power and Industrial Solutions Limited purchased the car for its MD in 2002 after paying ₹45.38 lakh, which was proclaimed by the manufacturer to be the safest on road.

In 2006, while Trehan was returning from Nasik to Mumbai after an official trip, the vehicle, being driven by an employee of the company, collided head-on with a goods-carrier and the impact was so high that its entire front portion was smashed, the complaint said.

It further alleged that the driver suffered minor injuries while Trehan suffered grievous injuries and was hospitalised for more than six weeks.

The complaint claimed that despite collision, none of the airbags of the vehicle opened and that had the airbags opened in time, the man might have suffered less injuries or probably no injury at all.

The commission noted that from the manual of the vehicle, it was clear that the side airbags were triggered only on the side on which an impact occurs in an accident and that the said airbags are independent of the front airbags.

"In the absence of such a disclosure in the owner's manual, as far as the functioning of the front passenger airbags are concerned would be deficient, on account of its not providing the requisite information to the buyer," the commission said in the order.

"Highlighting the safety features including the airbags for selling the vehicle, without such a disclosure, in my opinion, constituted an unfair and deceptive trade practice," it had said.