The much-awaited sports car, especially the V8 variant, promises to give the Porsches and the Ferraris a run for their money. Rachit Vats writes.
By : HT Photo
| Updated on: 03 May 2013, 13:05 PM

The British luxury car maker Jaguar has felt the need to return to its return for some years now --- an open top two-seater sportster, a driver's car, as it were.

So when it announced a couple of years ago that it is working on the F-Type, taking off from the fabled E-type of yester-years, the world sat up and took notice.

The engineering team at Jaguar have clearly flourished under the freedom that Tata Motors, the new owners of the marquee brand, had given. And they have had their fun.

Now, the F-type is ready. And Hindustan Times was given an opportunity to test out its racing feet in the plains of Spain.

Let us see what the F-type is all about. 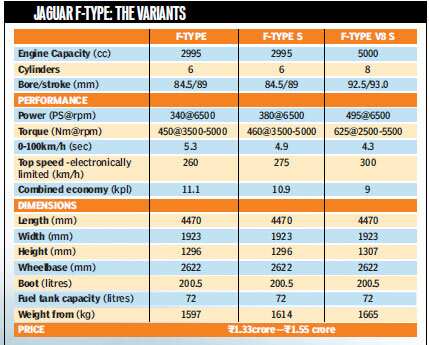 When it is close up, you would like to spend time taking in the athletic lines and the sensuous curves rather than simply leap into the seat and take off.

The discreet use of technology such as deployable spoiler and door handles keep the lines clean — there are no visual disturbances.

The F-TYPE capitalises on Jaguar's expertise in the use of aluminium, keeping the weight to a minimum while adding agility and response as the rider pushes the controls.

The raspy popping of the exhaust is distinctive, and attracts onlookers as much as the visual impact. Not a car for the shy and retiring types, this!

Interiors
Plush is the word that springs to mind. The bucket seats, the controls, the navigation system, all are top-of the line, as you would expect, and you could sink in easily and lose yourself in it.

The hood takes a princely 12 seconds to load - or slide quietly back into its nook. When it is on, it is as though the cabin is a sedan, not a sportster, it is that quiet. Nothing very extravagant but par for the course.

Performance
This is the heart of the story, right?

The F-type comes with three engine types — the F-TYPE, F-TYPE S and the F-TYPE V8 S.

A new driver, I started slow while driving the F-Type V6 on the roads and the V6S on the track. The cars beg to be pushed to the limits, and even at speeds in excess of 150 kph, it keeps asking for more.

But at no time does one feel the need to panic, as the stressed aluminum rigid frame and the well-tuned All-aluminium double wishbone front and rear suspension systems keep everything under control.

The exhaust note comes from an active exhaust system, standard on the S and V8 S models, in which valves open under load from 3000rpm, allowing the exhaust note to build to a crescendo at the redline.

Verdict
For long the sportscar fraternity was split into two halves--the Italians and Porsche. The F type clearly adds a third angle to it.

It is the epitome of a modern contemporary sports car that will stay refined and sombre in the city and wait for you to find a clear stretch of the road to go berserk.

It has the muscle, power, agility and at the same time refinement, to give you the best of both worlds that the Germans and Italians offer.

Whether it goes on to become a legend like the 911 or not, only time will tell, but from what we have at hand, it does look the part.