In one of the biggest automotive recalls in India, US car major General Motors on Wednesday red-flagged 114,000 units of its utility vehicle Tavera produced since 2005 for a faulty emissions issue. HT reports.
By : Hindustan Times
| Updated on: 26 Jul 2013, 12:23 PM

In one of the biggest automotive recalls in India, US car major General Motors on Wednesday red-flagged 114,000 units of its utility vehicle Tavera produced since 2005 for a faulty emissions issue.

"General Motors India informed Indian government authorities of an emissions issue involving the Tavera BS3 and an issue with the Tavera BS4 meeting certain specifications," the company said in a statement.

"GMI stopped production and sale of the Tavera BS3 on June 4 and the Tavera BS4 on July 2. The issues are not safety-related."

The company also stopped production of its small car Sail and the sedan based on it around the same time, for a quality-related issue. It has not decided yet whether to recall any of those cars, but their production will resume at the end of this month.

Production of the Tavera will resume only next month. 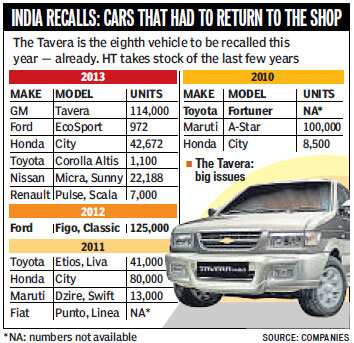 "We have identified a solution to the issues and performed the required engineering validation in the Tavera," said P Balendran, vice-president, corporate affairs, GM.

"The issues with the diesel variants of the Sail were of a different nature and not related to the one with Tavera. We have found a solution to that and production will resume later this month. We will need 2-3 weeks to ascertain whether vehicles on the road are affected by it."

This is the second-largest instance of car recalls in India: the other Detroit car major, Ford, recalled over 125,000 units of its small car Figo and sedan Classic last year for inspection of defects in the rear axle and for replacing a power steering hose.