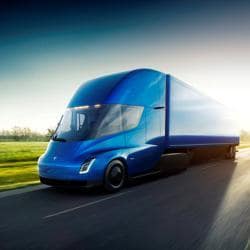 The Tesla Semi, the company's electric big-rig truck, is seen in this undated handout image released on November 16, 2017.

After revolutionizing electric cars, Tesla is tackling a new frontier in "green" transportation with the introduction a futuristic all-electric semi truck.

"We designed the Tesla truck to be like a bullet," said Tesla co-founder and CEO, Elon Musk.

The billionaire South African-born inventor unveiled the new vehicle Thursday at an event in Hawthorne, California, site of the automaker's design bureau and the headquarters of SpaceX, the aerospace company he also founded.

Its sleek, aerodynamic profile, in somber matte or metallic colours, will make it a standout on the road.

But the company is touting performance that it says will make the Tesla Semi quicker and more economical than today's diesel-powered trucks.

It has four independent electric motors, one for each of its wheels, a transmission that requires no shifting of gears, and a regenerative braking system that "gives it basically infinite brake life," Musk said.

The company says the truck can accelerate to 60 miles (100 kilometers) per hour in five seconds, and reach that speed in 20 seconds hauling a maximum 80,000 pound load, must faster than a traditional diesel truck.

It has a 500-mile range, long enough for most truck routes, 80 percent of which, according to Musk, are 250 miles or less.

"So it means you can go to your destination and back without recharging," he said.

Another innovation is the cab's design: the driver's seat is positioned in the centre instead of to the side. 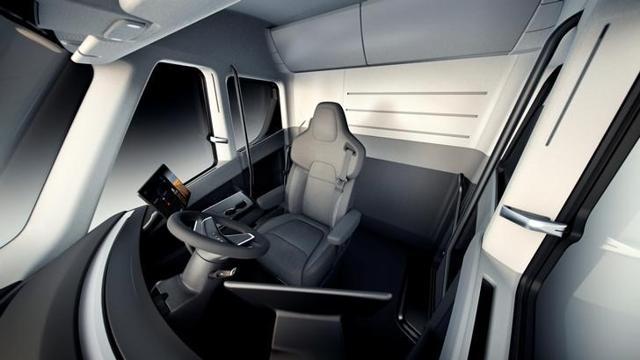 With no front engine or gear shift, the driver can be placed closer to the panoramic windshield, for a dominating view of the road.

The inside has enough head and legroom to stand up and walk around in.

"The Tesla Semi will deliver a far better experience for truck drivers, while increasing safety and significantly reducing the cost of cargo transport," Musk said.

He claimed that operating a diesel truck will cost 20 percent more than the Tesla Semi.

"Overall, the Semi is more responsive, covers more miles than a diesel truck in the same amount of time," he said.