Flying cars may soon be a reality if their presence at the Geneva International Auto Show is any indication. A Dutch company, Pal-V unveiled its Liberty Flying Car at the show and vowed that client deliveries could start by next year. Another concept flying car, Pop.Up Next was unveiled at the show.
By : Agence France-Presse
| Updated on: 08 Mar 2018, 12:34 PM 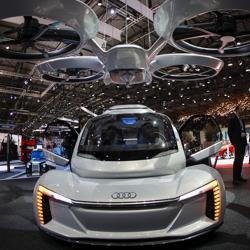 The Audi AG Pop.Up Next self-driving automobile and passenger drone concept vehicle on display at the 88th Geneva International Motor Show in Geneva, Switzerland, on Wednesday.

After gracing our screens for decades, flying cars are about to shift gears from dream to reality, with the unveiling of a commercial model in Geneva this week. From James Bond to The Jetsons, flying cars have long captured our imaginations, but now a Dutch company says they are almost ready to take to the streets, and the skies.

Pal-V unveiled its Liberty Flying Car -- a sleek, red three-wheeled gyrocopter-type vehicle -- at the Geneva Motor Show and vowed that client deliveries could start next year. This kind of transportation, which allows drivers to both zip through traffic on the ground or simply fly above it, has never ceased to inspire engineers.

As a sign that this technology is not only being toyed with in the start-up realm, an alliance between Airbus, Audi and Italdesign also presented a concept flying vehicle, Pop.Up Next, at the Geneva show. That modular system, made up of an electric car with a huge quadcopter fastened to the roof, is expected to be commercialised starting in 2025, the companies said.

For Pal-V (Personal Air and Land Vehicle), it was "frustration" that sparked the idea for Liberty. In a plane, "you start at a point where you don't want to start and you end up in a place where you don't want to be," company chief Robert Dingemanse said. "The Pal-V is the perfect product for city-to-city mobility," he said, pointing out that "outside the cities you fly, inside the city you drive."

The vehicle, which seats two, has retractable helicopter blades and is powered by a gasoline-fuelled engine. It can fly for 500 kilometres (310 miles), or can drive for nearly four times that distance without refuelling, reaching a maximum speed of 160 kilometres per hour. 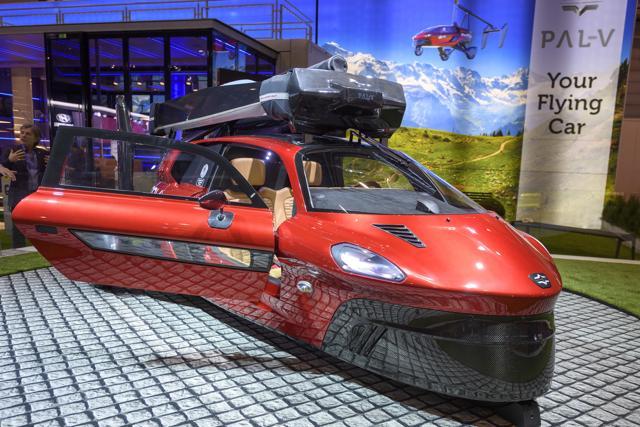 Buyers are already lining up: For now the expected waiting time for delivery is around two years. For take-off, "you can use the 10,000 strips available in Europe, and because you can drive, that's already enough," Dingemanse said, adding that "every German will have a small airport within 10 or 20 kilometres of his home".

But Pal-V's Liberty will not be a vehicle for everyman: Future drivers should expect to dish out between 10,000 and 20,000 euros ($12,000-$25,000) for pilot training, in addition to the anticipated 300,000-500,000-euro cost for the machine itself, Dingemanse said. That is the same price range as a small helicopter, he said, stressing though that Pal-V's flying car is "easier, maintenance costs are much lower, (and) it's much more useful than a normal plane or helicopter."

Public transport on the fly

While also falling into the flying vehicle category, the modular Pop.Up Next is based on a radically different design. The passenger capsule looks like a futuristic gondola lift, with a giant quadcopter attached to the roof. The motorised base of the vehicle, which drives, and the upper part, which flies, can be detached and can move autonomously. 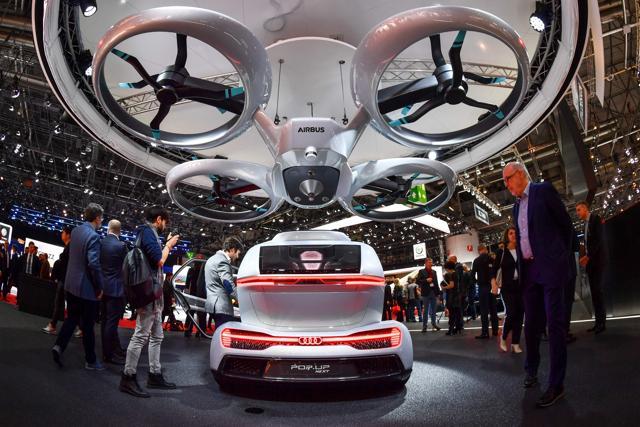 The Pop.Up Next is fully electric and was conceived for mass transport in an urban setting. "This vehicle was not conceived to be sold to individuals, (but) as a shared means of transport," Mark Cousin, the project chief at Airbus, which developed the flying portion of Pop.Up Next. Volkswagen's Italdesign unit meanwhile developed the passenger capsule while the motorised underbelly of the vehicle is based on Audi technology.

"I don't know if you would use it every day," Cousin said, pointing out that the vehicle would be practical for instance "going to the airport (at a price) hardly more expensive than a taxi", without needing to worry about traffic jams.

Airbus wants to launch the first urban trials by 2022, and is also looking into other uses, including transferring patients between hospitals and goods transport at night. "The convergence today of certain technologies, especially in batteries and electric engines, is making it possible to develop this kind of vehicle -- something that was impossible five or 10 years ago," Cousin said.

Not everyone is convinced that flying cars will soon be darkening our skies. "It's a beautiful idea," Ferdinand Dudenhoffer, who heads the Center for Automotive Research in Germany, said. But in light of the current air traffic density, "it is difficult to imagine that there will be lots of additional flying saucers" filling the skies, he said.