Brabus gets creative with more Mercedes

Proving that no Mercedes-Benz car is immune from potential power enhancement, Brabus has unveiled new tuning takes on the latest S-Class hybrid and even on the company's new V-Class people carrier.
By : AFP
| Updated on: 02 Jun 2015, 05:05 PM 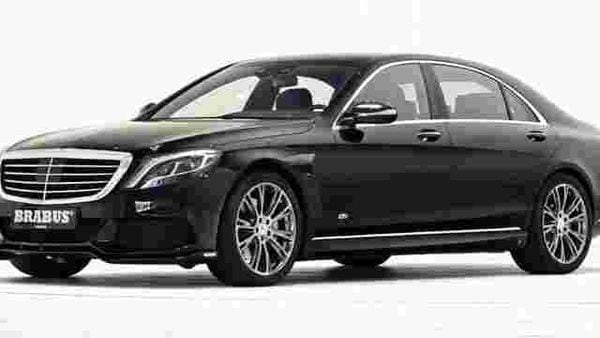 Proving that no Mercedes-Benz car is immune from potential power enhancement, Brabus has unveiled new tuning takes on the latest S-Class hybrid and even on the company's new V-Class people carrier.

For a huge, environmentally conscious luxury sedan, the standard S 500 Plug-in Hybrid is no slouch. Its V6 engine/electric motor combination offers 442bhp 5328bhp of which comes from the petrol engine) and plenty of torque. However, after Brabus has finished tinkering, that output is significantly increased to 493bhp. That translates into a 0-100km/h time of just 4.9 seconds but top speed is still electronically limited to 250km/h (155mph).

As well as being faster, the PowerXtra B50 Hybrid, as Brabus calls it, also cuts a more dynamic dash through the air thanks to a new front bumper and grille plus carbon fiber front and rear spoilers. The finishing external touches are a custom stainless steel exhaust and a choice of 19-, 20-, 21- or 22-inch Monoblock alloy wheels. Most impressive is that all of these upgrades come with a three-year, 100,000km warranty. What makes Brabus and Alpina stand out is that their tuning delivers everyday performance on cars that are conceivably driven every day.

But if the upgrades to the S-Class are impressive, they're nothing compared to what the company has managed with Mercedes' new V-Class people carrier, a vehicle conceived as a comfortable load-lugger rather than a sportscar.

Still, Brabus has redeveloped the suspension's springs so that the car can sit lower, hold the road better and handle more power. It's also developed some carbon fibre add-ons for improving aerodynamics and has squeezed another 44bhp out of the minivan's four-cylinder turbodiesel engine. It now outputs 232bhp -- so 0-100km/h in 8.8 seconds and a top speed of 210km/h (130mph). The idea, claims the company, is that the car will retain its cosseting ride and fuel economy, but never get caught in traffic.

However, if it is trapped in a tailback, the interior upgrades will help pass the time. Integrated tablet-like control panels next to the rear doors for closing the blinds and lowering the two roof-suspended TV monitors, a 4G/LTE hotspot, support for Apple TV and the option of a completely bespoke leather or Alcantara interior with wood or carbon fiber accents.