Maruti Suzuki India Ltd has already launched its multi-purpose vehicle XL6 and is expected to launch another hatchback before the festival season ends. Hatchbacks still enjoy almost 70% of the market share
By : livemint
| Updated on: 31 Aug 2019, 02:22 PM 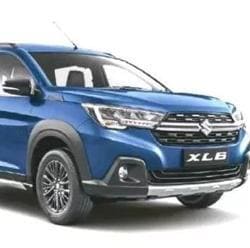 A render of the Maruti Suzuki XL6

As vehicle manufacturers gear up for a possible revival in sales in the upcoming festival season, most of them are betting on sport utility vehicles or hatchbacks as opposed to sedans to engineer a recovery in the domestic market.

The South Korean manufacturer launched its first compact SUV, Venue in the first quarter of the fiscal and bookings and wait list for the vehicle have been surging since then.

In mid-August, Kia Motors India, a new entrant, launched its first product in the Indian market which is also another mid-size SUV, known as Seltos.

French car maker, Renault, also jumped in the race with its new product Triber, a multi-purpose vehicle but under four metres in length. The company is also expected to launch the second generation of its popular hatchback Kwid, sometime during the festival months.

As consumption demand in the market has nosedived, leading to multi decade decline in auto sales, especially since the start of the current financial year, auto makers are betting big on two of the most volume-generating segment -- sport utility vehicle and hatchback.

Hatchbacks still enjoy almost 70% of the market share and ever since the launch of compact SUVs, with the introduction of the Renault Duster and Ford Ecosport, the sport utility vehicle segment has substantially increased its contribution in the overall sales of passenger vehicles in the country.

According to data released by Society of Indian Automobile Manufacturers, in FY 19 sales of sport utility vehicles increased by just 2% to 941,461 units despite low demand. In the April to June period, sales of SUVs declined 4.5% year-on-year to 224,224 units while passenger car sales declined significantly by 23.32% year-on-year to 447453 units.