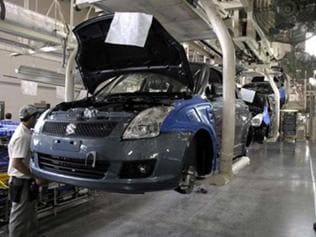 The domestic passenger vehicle industry endured a sluggish month in June as most major manufacturers barring Tata Motors and Honda either posted a decline in sales or single-digit growth. 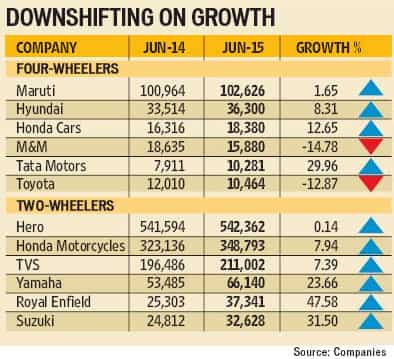 Market leader Maruti Suzuki, which had been outpacing the industry and growing in double digits in the last few months, reported a mere 1.65% growth in June compared to the same month last year.

Arch rival Hyundai was only slightly better with an 8.3% growth. However, utility vehicle major Mahindra and Mahindra and Japanese automobile giant Toyota were not that lucky and recorded a 15% and 13% decline in sales respectively.

Industry volumes have remained stagnant over the first three months of this fiscal and there are fears the trend may worsen if the monsoon misfires. Tata Motors and Honda were the only two companies to register healthy growth at 30% and 12.6% respectively. In June, Honda displaced Mahindra as the third largest player in the domestic car market.

"If we look at the overall numbers from April to June, volumes have been more or less stagnant. This isn't a healthy sign," said Mayank Pareek, president, passenger vehicle business unit, Tata Motors. "Like every year, it will again boil down to how good the festive season is this year. We need the industry to grow as a whole as our own individual performance provides little solace."

The gloom has spread to the two-wheeler sector as well. Hero MotoCorp saw a 0.14% growth while Honda Motorcycle and Scooter India also saw its growth taper down to single digit.