The decline in auto sales in FY20 was led by a 15-20 per cent price hikes due to new safety norms, higher insurance and ownership costs, liquidity crisis in the NBFC sector and increased load carrying capacity for medium and heavy commercial vehicles.
By : Mumbai
| Updated on: 15 Sep 2019, 05:47 PM 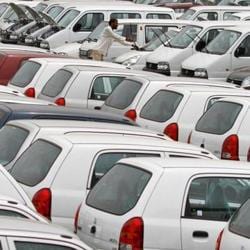 FILE PHOTO: A worker adjusts the windscreen wipers of a parked car at a Maruti Suzuki stockyard on the outskirts of the western Indian city of Ahmedabad September 1, 2011. REUTERS/Amit Dave/File Photo To match Insight INDIA-AUTOS/FINANCING

Automobile sales, excluding tractors is expected to grow 5-7 per cent this fiscal owing to factors such as higher vehicle prices, financing issues and higher insurance cost among others, Care Ratings said on Friday.

The agency revised its outlook after industry volume witnessed sharpest decline at 13.3 per cent in April-August over the year-ago period.

The auto sales in the same period last year registered a double-digit growth at 14.5 per cent, it said.

Such double-digit drop (13.3 per cent) was witnessed during the same period in the fiscal 1993, when sales declined by over 21 per cent year-on-year, it said.

The decline in sales in FY20 was led by a 15-20 per cent price hikes due to new safety norms, higher insurance and ownership costs, liquidity crisis in the NBFC sector and increased load carrying capacity for medium and heavy commercial vehicles that led to high inventories causing slow movement in movement of vehicles, Care Rating said "We have therefore revised our outlook for overall auto sales (excluding tractors) to 5-7% for FY20," it said.

However, in August, the sales of passenger cars and three wheelers have witnessed growth of about 1.8 percent and 9 percent, respectively, on month-on-month basis, while the decline in sales of commercial vehicles and two wheelers have narrowed down to 7.4 per cent and 0.3 per cent month-on-month, respectively, as against a decline of 17.5 percent and 6.6 percent during the previous month, the rating agency said.

The sales growth during the period was largely restricted on account of weak demand for commercial vehicles and passenger vehicles registering a double-digit decline of 21.5 percent and 18.8 percent y-o-y while decline in sales of two and three wheelers segment was restricted to 12.2 percent during the month.

"Going forward, we expect demand to continue to remain muted during Q2 FY20 and pick up only by Q3 FY20 and continue in Q4 FY20 with various planned product launches, festival demand and pre-buying of automobiles before the implementation of BS-VI norms from April 1, 2020," Care said.