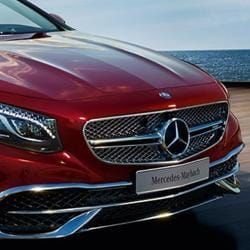 Mercedes-Benz has announced the brand will launch its Maybach S650 during the Auto Expo 2018.

The 14th edition of the biennial Auto Expo, slated for February 9-14, is expected to see 24 new launches and over 100 unveiling of vehicles, the organisers said today. The expo is being held at the India Expo Mart in Greater Noida, near Delhi, while components show will be held at the Pragati Maidan in Delhi from February 8-11.

The joint inauguration of Auto Expo 2018 will be held on February 8. "We are going to see over 24 launches and unveiling of over 100 vehicles during the expo," Society for Indian Mobile Automobile Manufacturers Association (SIAM) head Sugato Sen said here during a media conference.

Maruti Suzuki India has already announced it will showcase a concept compact car with "SUV like characters", called the ConceptFutureS, at the expo. The new concept will be a uniquely styled compact car with distinct SUV like characters aimed to delight customers in the compact car space, the company said in a statement. German luxury car maker Mercedes-Benz plans to launch its Maybach S 650 and showcase Concept EQ, a forerunner of the company's new product brand for electric mobility during the show.

This year's show will be much higher than the 2016 edition, which saw only two-three launches, he said. The new launches and unveiling of the products will be from across segments --passenger and commercial vehicles and two-wheelers. "On February 7-8, there is a preview of more than 100 products," chairman of the SIAM trade fair group, Arun Malhotra said. The expo is being organised by SIAM jointly with the Automotive Component Manufacturers Association of India (ACMA) and the Confederation of Indian Industry (CII).

Asked about some of the leasing players such as Nissan, Audi, Volkswagen, Skoda, Ford and Ducati, skipping the mega event, Sen said the trend generally has been that only 50% of the SIAM members participate in the show. "Some of the regulars have opted out. We have 48 members and none of the event in the past has seen more than 50% participation," Sen said.

He, however, refuted reports in a section of the media, saying companies are skipping the show due to high cost of participation, adding there are some new entrants like Korean Kia Motors and Japanese Kawasaki in the current expo. "India right now is going through a huge disruption in the auto market. With direct transition from BS-IV to BS-VI in two years and the EV plan etc, companies are not really bringing in new conventional vehicles anymore," he said. "Also, we have not changed the space rentals since 2012. On the contrary, we have reduced them by offering discounts," he said.