Home Auto News Audi At The Frankfurt Auto Show: An Electric Suv Concept Among The Premieres

Audi at the Frankfurt Auto Show: an electric SUV concept among the premieres

At the 66th Frankfurt Auto Show, Audi is planning on stealing the show with an eagerly awaited fully electric SUV concept.
By : AFP
| Updated on: 27 Aug 2015, 03:16 PM 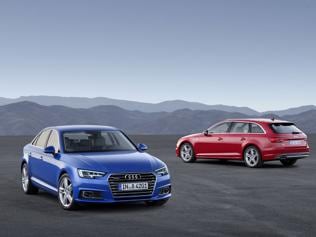 The next generation of Audi A4 and A4 Avant will be available for purchase beginning in October. Photo:AFP

At the 66th Frankfurt Auto Show, Audi is planning on stealing the show with an eagerly awaited fully electric SUV concept. The crowds will also get to admire the German manufacturer's new range of A4s as well as the insanely powerful and luxurious S8 Plus.

The Audi e-tron quattro concept should provide a hint at the future of the brand's sporty electric SUVs, likely starting with the Audi Q6 sometime before 2018. Fit for four passengers, the shape of the vehicle is designed to reduce drag with an aerodynamically optimized underbody that's completely closed, helping to achieve a low coefficient of drag of 0.25, a record for the SUV segment according to Audi. This, along with the new lithium-ion batteries supplied by LG Chem and Samsung SDI, should give the vehicle a range of 310 miles (500 km) on a single charge. On this SUV model, there will be three electric motors, one on the front axle and two on the rear, creating the vaunted Audi all-wheel-drive system. In designing its first fully electric SUV, Audi is throwing down the gauntlet to Tesla and its upcoming Model X. Meanwhile, not content to watch the competition from the sidelines, BMW is reportedly also assessing proposals for an all-electric SUV that could be derived from its upcoming X7 model.

Frankfurt will also be the perfect opportunity for Audi to highlight its new A4, unveiled earlier this year but which you won't be able to drive off the showroom floor until the end of the year. The new generation of the family sedan has better fuel economy and is equipped with all of Audi's latest technological breakthroughs. In all, the new family of A4s will be available with one of seven different engines (3 petrol and 4 diesel) pushing between 146 and 268hp. The brand's most popular model appears set to be available in 2016 as both an electric hybrid (e-tron) and a natural gas hybrid (g-tron).

A spectacular sedan is also expected to take up some space at the Audi pavilion. The US-spec Audi S8 has power coming from a 520-hp 4.0-liter twin-turbocharged V-8, mated to an eight-speed automatic, but for the S8 Plus, Audi has uncorked an additional 85hp, jetting the car from 0-60 mph (0-100 km/h) in a scarcely believable 3.8 seconds. The Plus can also be de-restricted to reach 189.5 mph (300 km/h) with the 'dynamic package' (standard in the German market, an open question for other markets). This beast of a sedan should hit the market starting in October.

Frankfurt could also be the staging ground for the much awaited announcement of an Audi TT SUV, somewhat like the TT Offroad concept presented at the Beijing Auto Show in 2014.