Alfa Romeo Giulia, with armoured windows, to be part of Italian police force 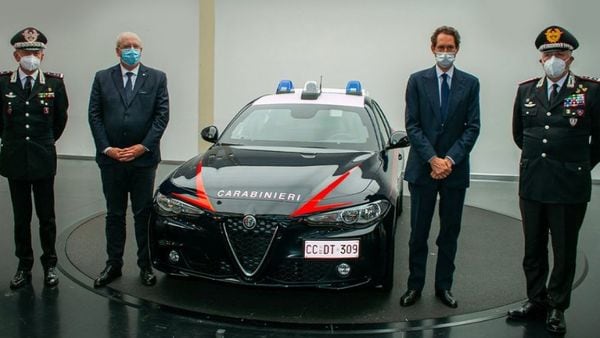 This photo was tweeted by @alfa_romeo

The first batch of Alfa Romeo Giulia models meant for the police force in Italy have arrived and will perform patrol duties for the department. Personnel from the Carabinieri - the Italian military division tasked with policing responsibilities - will gradually expand its fleet Alfa Romeo Giulia to include as many as 1,700 units.

The Alfa Romeo Giulia may not be much like the supercars used by Dubai Police to fight crime but it has the right credentials for patrolling duties. Under the hood is a 2.0-litre motor that has 197 hp on offer. This engine is mated to an eight-speed automatic transmission unit. Firing to 100 kmph from standstill takes around 6.6 seconds and the car can hit a top speed of around 230 kmph.

The Giulia also looks quite sleek and complete with the black colour and official liveries on the Carabinieri models, has a menacing appearance. But the most interesting bit about these cop cars are that these specific models meant for the cops have received special upgrades. Reports suggest that each model will be fitted with B4-level armour on the windows and front doors to protect it from weapon fire. The three emergency warning lights on the roof can be customized.

There is space inside to accommodate one culprit even as three cops can adjust inside the Giulia.

Alfa Romeo had had a long association with law enforcement agencies in Italy with the first units of the 1900 M “Matta" entering service 70 years ago. The company states that it looks forward to continuing with the association.

Around the world, police departments are looking at having more capable vehicles assist personnel in daily duties. From cars with thunderous engines to even electric vehicles, there is a marked shift in the sort of vehicles that are brought in for crime-fighting and routine patrol duties. And while Dubai Police, with its fleet of supercars and audaciously luxurious vehicles, remain quite the force on the move, cars like the Alfa Romeo Giulia should be more than capable of taking on any challenge.