A Tiger prowls the land

A FAIR STEAL Loaded with technology and comfort features, the Triumph Tiger XCx can take you places. But competition is hotting up
By : Hindustan Times
| Updated on: 06 Jul 2015, 11:26 AM 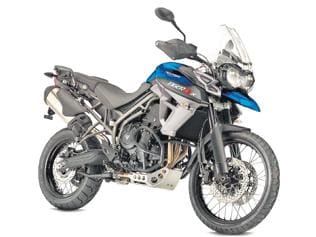 With the advent of foreign car and bike-makers, distances are getting shorter in India. No place is too remote, be it in the hills or in the remote hinterlands, and traffic jams have become common in even the rarified Ladakh.

It is for the avid off-roader that British bikemaker Triumph launched the various avatars of the Tiger, in two enginesizes and different iterations. We recently rode the hardcore offroader, the Tiger XCx; here is what we found. 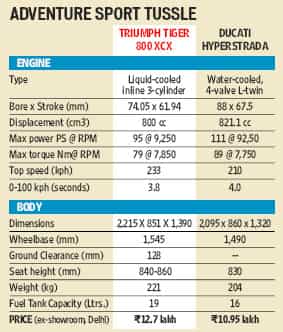 Adventure bikes are a peculiar breed - tall, with high ground-clearance, an upright stance and loads of torque. The idea is that you stand on the footpegs and literally go berserk, no matter what the terrain. These bikes can handle dirt, slush and rock, and the limitation is the rider's, not the bike's.

The XCx has an 800cc inlinethree-cylinder engine that belts out close to 100 bhp, and is loaded with features: spoke wheels (21" up front and 17" at the rear), standard anti-lock braking system with over-ride provision — both front and aft— three riding modes and four settings for throttle mapping, traction control, cruise control and drive-by-wire accelerator; at this price range, a steal.

The seat height is intimidating for a short person, and this rider had to stretch to get both feet on the ground. Triumph does offer an accessory seat to lower height down to a more reassuring 800820 mm.

The seating position tells you exactly why an adventure bike is THE bike for daily use - the upright posture is easy on the back, standing up to ride out potholes is a breeze, and driveby-wire throttle is oh, so easy on the wrist. The pleasant surprise is the engine: nothing prepares you for the massive takeoff. It did 0-100 kph in under four seconds, in first gear. Go one gear per second all the way to sixth, and you can come out at a leisurely 80-90 kph. The engine is mild at low rpms, but howls at over 10,000. A case for adding an Akrapovic exhaust pipe.

Considering that it also rolls over the roughs that pass for roads in the rural areas, this is great. Built for offroading, but it doesn't reject roads.

Questions: Does the high ground clearance let you take curves? Yes! All the way down to scraping the footpegs.

Does the awkward height come in the way in tight riding? No. The clutch is pleasantly light, and the throttle a breeze, brakes rock steady.

How about engine heat? Ah well, this can be an issue. It does not take kindly to heavy traffic conditions. That said, the Tiger is a sight better than the huge air-cooled V-Twins or the litreplus sportsbikes.

What about competition? There are several adventure bikes around - starting from Benelli's TNT 600 GT, an inline four 600cc, to the elite BMW R1,200GS, with Suzuki VStrom, Kawasaki Versys and Ducati's Hyperstrada in the middle.

The 821-cc Hyperstrada and the one-litre Versys are the closest to the Tiger. The much cheaper Benelli can also go places, though it is not loaded with so much technology. If Bajaj cousin KTM brings its 1190cc Adventure to India, the battle will really hot up, off the roads.