Officials say efforts are on to restore normal vehicular movement in the area in and around Atal Tunnel.
By : ANI
| Updated on: 04 Jan 2021, 08:53 AM 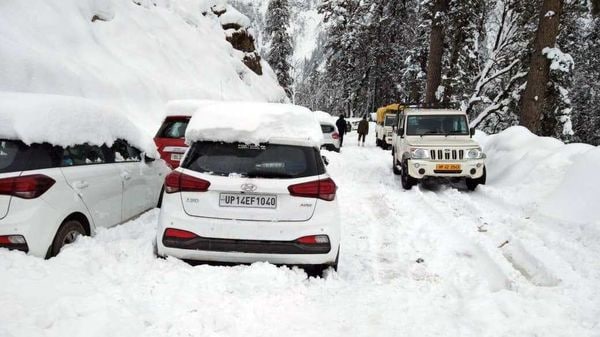 Stranded vehicles of tourists in snow in Dhundhi area of Kullu district near the South Portal of Atal Tunnel.

Kullu district police evacuated a total of 82 stranded tourist vehicles, stranded due to heavy snowfall, from the south portal area of Atal tunnel near Dhundhi in Kullu district on Sunday.

A night earlier, the team had rescued over 300 tourists from the region.

Raman Gharsangi, Sub Divisional Magistrate (SDM) Manali had in a statement on Saturday said that efforts are being made to restore vehicular traffic and rescue stranded people.

Meanwhile, the Meteorological Department on December 29 had issued a 'yellow' weather warning for heavy snowfall in Himachal Pradesh.

The department issued a 'yellow' weather warning of heavy snowfall in mid and high hills on January 5 and thunderstorm and lightning in plains and low hills from January 3 to 5.