Will Jaguar set the Pace at this year's Frankfurt motor show?

Like a number of automotive stalwarts whose history was until now steeped in on-road success, Jaguar is planning to drive straight off-road and into the luxury crossover market at this year\'s Frankfurt show with the first SUV in its 80-year history -- The F-Pace.
By : AFP
| Updated on: 09 Sep 2015, 12:10 PM 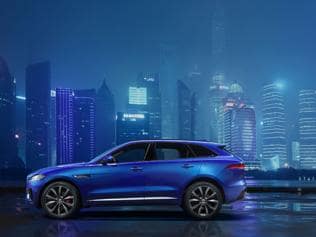 Like a number of automotive stalwarts whose history was until now steeped in on-road success, Jaguar is planning to drive straight off-road and into the luxury crossover market at this year's Frankfurt show with the first SUV in its 80-year history -- The F-Pace.

Teased on Friday in its first official, non-camouflaged image, ahead of its global reveal at a live streamed event on September 14, the F-Pace is going to face some serious scrutiny and some serious challenges from rivals at this year's Frankfurt motor show.

However, the F-Pace may well have more than one ace up its sleeve. The first trump card being that Jaguar's sister firm is Land Rover, and that company, more than any other in the industry knows a thing or two about building capable, appealing and premium vehicles that can cope with the harshest of conditions.

And the second is that the new vehicle will use the same construction techniques that Jaguar is applying to its latest crop of sporstcars and premium sedans. So as well as a very good four-wheel drive system, the F-Pace promises to be lightweight and assured, agile even, thanks to prodigious use of aluminum in its build. The decision to call the car the F-Pace is to suggest it has shared DNA with its current flagship sportscar the all-wheel-drive F-Type coupe.

'2015 is the 80th anniversary of Jaguar Cars and it has been a monumental year of transformation for the brand,' said Kevin Stride, Jaguar Land Rover Vehicle Line Director. 'Today is a proud moment for Jaguar as we launch the F-PACE, our first compact luxury SUV.'

However, it won't be the last Jaguar-badged off-roader. The company has made no secret that the F-Pace will spawn a range of vehicles if it sells in the volumes expected. That could mean a more compact SUV to challenge the new BMW X1 and potentially something as large as its flagship sedan, the XJ. That could put Jaguar on a collision course with fellow UK luxury automotive brand, Bentley, who will be unveiling its first SUV, the Bentayga this month.

Bentley says at launch, the Bentayga will be the most powerful and fastest SUV on the road -- capable of hitting 200mph. But with all the competition and the apparent insatiable desire from the car-buying public for all SUVs great and small, it will be just a matter of time before something else comes along that's faster and more potent still.