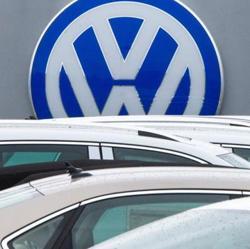 German car maker Volkswagen at a dealership in Woodbridge on September 29, 2015.

Volkswagen has no plans to follow local rival Daimler in considering changing the group's legal structure, its chief executive said, even as the company undergoes the biggest transformation in its history.

The world's largest vehicle maker by sales said on Monday it was stepping up the pace on its electric car programme, announcing more than 20 billion euros ($23.86 billion) of new investments over the next 12 years.

Daimler said in July it may split parts of its business into separate legal entities, a move that investors have said could unlock billions of euros in value by listing separate parts of the business and help fund its development of electric and robotic cars.

Asked by reporters at the Frankfurt auto show whether he could imagine following rivals in looking at changing the group's structure, VW chief executive Matthias Mueller said: "Others are always faster than Volkswagen but, somehow, we are still successful."

"No, one of my major tasks is to always and again look into such matters and reflect on the situation," he added. "That is what we do and what I do with all authority and calm. And I will not let anyone push me."

A broader move by VW to create a holding structure could unlock an incremental 50 billion euros in value, on top of the group's 68 billion in market capitalisation, analysts at research firm Evercore ISI said in a note.