Unassuming, but delightful on city roads

That is what Inazuma means in Japanese. The quarter-litre twin engine from Suzuki is a nippy ride, but will the high price tag nip it in the bud?
By : Hindustan Times
| Updated on: 11 Apr 2014, 12:06 PM

This is a three-and-a-half lakh rupee bike? Doesn't look like much!

That's the first thought that sprung to mind when one came face-to-face with the bike that Suzuki hopes will start a storm in India.

There is nothing wrong with the bike, mind. It is very handsome, despite the absence of graphics altogether. However, it is not exactly exciting, either. The fuel tank is the centerpiece, with indicator lights built into it, and resting on the scaffolding of a radiator grill - yes, it is liquid cooled. Twin exhausts from the parallel twin engine run down along the front of the frame conventionally, tapering into twin guns at the back. The rear mono-shock is hidden away under the seat, the diamondshaped headlight has a small cowl … everything looks so… well, conventional. The fit and finishing are top notch, but will India pay the asking price for this bike? Will it stand out from the hundreds of thousands of commuter bikes - sufficiently - to justify the bankrolling?

There is only one way to find out. Ride it.

Press the self-starter, and the engine springs to life. Here is the first surprise. Its gentle rumble translates into a fairly menacing growl when throttled. There is a distinct feeling that it is straining at the leash, and just wants to be set free.

Put a leg over the saddle, and one finds that with one's mid-size frame, it is just about right. A taller person may feel cramped. The gears are conventional (again that word) - one down, five up. Let us get going.

The gear clicks into place reassuringly, and one is off. Surprise number two: it is capable of throwing you off. Surprising, because despite the two cylinders, the statistics are almost the same as the Honda CBR 250R, and one entered the ride anticipating similar performance.

Three gears down, one has topped three digits on the clock, the wind is howling through the helmet, and the engine is emitting the joyful high-pitch whine of a twin engine. We're in business.

This is what the pricing of the Inazuma is all about. Not looks, not convention, but sheer riding pleasure. The revs top off at about 9,000 rpm. The engine is superb, with no trace of vibrations. The handlebar is rock steady. The shockers are soft and smooth, but capable of handling corners. The suspension has a seven-way adjustable springload, so one can tighten it to suit one's riding style.

Brakes are disks aft and fore, and perform up to par, though ABS would have been welcome.

Two things raise questions: the seat, and the lack of a more substantial cowl up front.

The single-piece seat is likely to send the pillion rider sliding, despite the presence of the grab bar, as this is not a bike one will ride sedately at 50 kph in sixth gear. It is an animal that screams for the throttle to be redlined, again and again.

So why such a conventional seat? Especially when the top small bikes all have divided seats?

The lack of a good windbreaker up front becomes screamingly evident when one goes beyond 120 kph. We hit a wall at 140 kph, when the wind made things impossible and one had to come down to 120. Suzuki does have a semi-faired Inazuma in Europe. 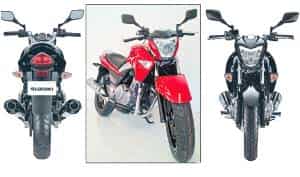 So, the million dollar question: Should you buy this bike? That is where the price tag bobs up once again. The single-cylinder Honda CBR is priced a lakh rupees below it. The more well-rounded Kawasaki Ninja 300 costs considerably more. The only twin in this league at present is the Hyosung V-twin, but it cannot hold a candle to the Inazuma. Look farther afield and you might see the KTM 390 Duke, or the Royal Enfield Continental GT, but they are still single-cylinders.

So as of now, the Inazuma has no rival. It has just the right size and performance to make a meal of city traffic conditions or to enjoy short bursts in the country, enjoying the curves and roundabouts. It is not for highways, where the wind will be killjoy. Maybe a faired version will come later. But for heaven's sake, don't reduce it to a commuter, that would be like putting a racehorse to work on the farm.