Two Beetles on a Beatles discovery 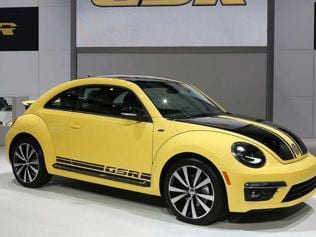 The reason the why the Beetle earned such an iconic stature is because of its cherubic charm and it looks special even today.

My colleague Shapur and I are on the road to Rishikesh. The car he is driving is the original Beetle. This simple, rugged car was designed by Dr. Ferdinand Porsche in 1934. Over 21 million of these air-cooled rear-engine cars were sold in the 65 years it was in production.

I too am driving a Beetle, but the car I am driving is the latest iteration of the automotive icon. Though the car's silhouette is unmistakably Beetle that's where the similarity ends. The new car has a water-cooled engine which is mounted in the front and drives the front wheels which is diametrically opposite of the orignal's air-cooled, rear-engine, rear-wheel-drive design. But the reason the why the Beetle earned such an iconic stature is because of its cherubic charm and it looks special even today. No wonder it also featured in many Hollywood movies including Disney's Herbie series.

Our trip to Rishikesh is to go and pay homage to the Beatles. The Beetle and the Beatles, are both symbols of the swinging sixties. The Beatles had come to Rishikesh in the late 60s and stayed at Maharishi Mahesh Yogi's ashram for nearly two months. So what better car than the Beetles for our trip to look for the 'Beatles Ashram'?

Funnily, both the Beatles and the Beetle didn't have the easiest of beginnings. No one thought the 'unattractive' Volkswagen Beetle would be commercially viable after the war, and in 1962, the Beatles were turned down by Decca Records, who, incredibly said the band had no future in show business!

Though I love the looks of the old Beetle I am not enamored with old cars. They tend to be unreliable and uncomfortable. Give me a modern day car with all the bells and whistles technology can engineer and I'm happy. The all-new Beetle is powered by a 1.4-litre turbo petrol that pushes out 150hp of power in refined and responsive manner. Plus I am ensconced in surrounded by high-grade materials and excellent build quality. Yes sir, I'm not complaining.

But I'm sure Shapur is complaining. The old fashioned dashboard might have a retro cool but the spartan cabin and lack of creature comforts must be tiring him out. Plus the four speed manual gearbox and unassisted steering doesn't make life easy, especially on twisty mountain roads.

But I am wrong. When we stop for a break I discover that Shapur is enjoying driving the old car. Because the engine sits on top of the rear wheels, the rear of the car stays planted making it fun to drive. So it's quite agile once you get used to the unassisted steering. That, and the metallic clack-clack of the gearbox, has got him hooked. Not everything is hunky-dory about the old Beetle though. In spite of Shapur using all his 100-kilo heft to stomp on the brake pedal, the car takes a disconcertingly long time to shed speed.

Not wanting him to rear-end me I flag him ahead as we restart our journey to the Beatles Ashram. As he overtakes me I can hear its distinctive engine note. The whhhrrrrr of the fan and the chuff, chuff, chuff of the exhaust is such a distinctive characteristic of this long standing air-cooled rear-engine architecture. The last few kilometers call for more than a bit of off-roading. The road ahead is filled with silt and stones but both the old and the new car manage spectacularly , with the latter in particular having plenty of ground clearance.

The Beatles Ashram is now a part of the Rajaji National park. The original name of the place is Chaurasia Kutia. Chaurasia in Hindi is 84 and Kutia is Hindi for a hut. The place is in ruins and the forest has reclaimed what was once an 18-acre ashram. Some of the dilapidated structures look too dangerous to enter. The first thing that strikes you are the curious igloo like structures that seem like a kitsch artist's interpretation of Indian architecture. These were the meditation huts after which the ashram was named.

This is where the Beatles had one of their most productive periods. Songs you can find in Abbey Road and White Album. This is where some of their most memorable songs like 'Dear Prudence' were written. Prudence was part of the group that came here with the Beatles to learn Transcendental Meditation from the Maharishi. Once she locked herself up in one of the huts for three weeks to meditate and reach God quicker than anybody else. To get her out John Lennon wrote, 'Dear Prudence won't you come out to play?'

As we stroll through the vast complex we discover pockets of beautiful art amidst the ruins. Vibrant, colourful, psychedelic forms and figures on roofless crumbling walls. Graffiti artists' from all over the world have paid ode to the fab four and the sixties. All the songs they composed in Rishikesh have been made into artwork on the walls. 'Mother Nature's Son' was composed after a lecture from the Maharishi. 'Why don't we do it in the Road' was written after Paul saw two monkeys at it. And George Harrison's 'Here comes the sun'.

The sun is setting and the grumbling in my stomach reminds me that we have missed lunch in the day's excitement. It's time to head back. As we walk back to our respective cars I cannot help myself and head over to the Old Beetle. After all the day will be incomplete without a behind the wheel experience of the old girl.