The world’s top automaker Toyota said assembly lines in Japan would go offline for a week from February 8 owing to a lack of components from affiliate Aichi Steel.
By : AFP
| Updated on: 01 Feb 2016, 08:45 AM 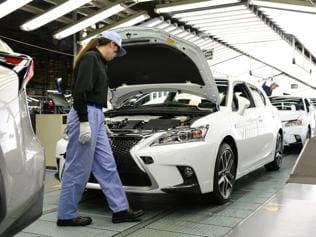 Toyota Motor’s subsidiary Toyota Motor Kyushu checking Lexus vehicles on an assembly line at the Miyata Plant in Miyawaka, Fukuoka Prefecture. The motor giant will halt production in Japan following a shortage in supply of parts.

Toyota will temporarily stop its vehicle production in Japan due to shortage of parts following an explosion at a supplier and also metal crisis.

The world's top automaker said assembly lines in its home market would go offline for a week from February 8 owing to a lack of components from affiliate Aichi Steel.

Overseas production would not be suspended, it added.

Toyota publishes its nine-month financial results this week. It did not say if the temporary production shutdown would affect its results in the current quarter.

"Operations are scheduled to recommence on February 15, and vehicle production on lines outside Japan will not be suspended," the company said.

"Toyota will continue to take any measures necessary to minimise the impact of this incident on vehicle production."

Toyota said it may get parts made on alternate production lines operated by Aichi Steel and also could procure components from other steelmakers to meet its needs.

Aichi Steel, which produces speciality steel products among other items, was hit by an explosion on January 8 which badly damaged parts of its production site.

Aichi Steel is expected to return to full operation in March.

Toyota said it does not disclose its daily production plans, but the firm has said it produced 14,000 units a day in 2015.

The company, which surpassed Volkswagen in 2015 to keep the title of world's top-selling automaker, produced more than four million cars in Japan last year and over 10 million worldwide.

At the Tokyo Stocks Exchange, Toyota shares rose 1.31% to 7,294 in early trade, mirroring the headline Nikkei index, which added 1.27%.