Home Auto News There’s No Monster Quite Like It, Worldwide

Arm-wrenching torque, a traffic-stopping presence, and in-your-face agression
By : Hindustan Times
| Updated on: 08 May 2015, 10:50 AM 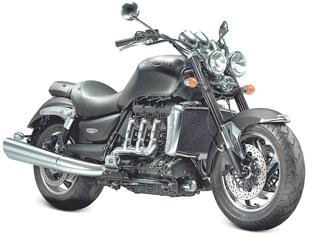 YOU CAN NEVER LOSE SIGHT OF THE FACT THAT THERE IS A BEAST UNDER YOU, STRAINING TO THROW YOU OFF

What do you get if you stack three Maruti 800 engines one after the other? A Triumph Rocket II Roadster, that is what.

The biggest production bike in the world is bigger than the rest of the world by a wide margin. The next biggest bikes are probably the 1,800-cc Suzuki Intruder and Honda Gold Wing, and they are pretty much monsters themselves.

The Rocket, however, is an amiable monster, as we found after spending a few days with Triumph's signature motorcycle.

At first sight, the Rocket looks like it has been built around its massive engine. "Don't look at the fuel tank when you sit on it," was the company's simple advice. The 24-litre tank only adds to the massive road-presence of the Rocket III. Once you get over that initial shock, you take in the details: twin headlights (another Triumph signature), the massive radiator grille, the massive tyres, the massive seat...

The seating is upright, not really laid back like a cruiser. So are the footpegs placed to support the upright stance. Massive 43-mm upside down forks, an open-chest handlebar, twin bazooka exhaust pipes and a neat rear-end complete the picture.

Timidly, you get on board, swing off the side stand and start the engine. The whispery thrum of a triple-cylinder engine rises into a roar at the slightest twist of the throttle, and the bike writhes in your hands, eager to get off the mark. And you quail.

Put it in gear and start off, though, and everything sort of settles down. It is as though the beast has been bridled. Carefully controlled throttle release gets you on to open roads without disaster, and you settle down to enjoy the experience.

And an experience it is. Riding on low revs gear-to-gear, you can never lose sight of the twin facts that you have over 220 Newton Metres of torque in your right fist, and nearly 400 kgs of monster raring to go under you. Twist the throttle, and the monster rears up and sets off in right earnest. And your arms are nearly wrenched out of their sockets. This happens no matter which gear you are in, and at what speed. And that is what the Rocket is all about: torque.

ABS, aft Nissin 4-piston fixed calliper and rear Brembo 2-piston floating calliper disc brakes, again both massive, ensure that everything can be brought to a halt in a hurry if needed. Well balanced, the bike is friendly around corners at reasonable speeds. Sharp corners at high speeds? You'll need training.

If anything, the question to put up against this bike is, do you really need it? Apparently people do, because it is one of Triumph's more popular bikes worldwide, and even in India, where it is the company's costliest model. And the buyers are not Arnold Schwarzenegger types, either, but 18- and 19-year-olds.

One thing is certain, though: riding the Rocket III, you will not get lost in the crowd. The bike just turned 10, and Triumph has put out a special edition: the Rocket X. The question is, are you up for the ride?