If you thought that the Hennessey Venom GT was fast, just wait and see what the idiosyncratic Texan supercar maker has planned as an encore.
By : AFP
| Updated on: 06 Aug 2014, 17:08 PM

If you thought that the Hennessey Venom GT was fast, just wait and see what the idiosyncratic Texan supercar maker has planned as an encore.

Called the Venom F5 as a nod towards the Fujita scale for measuring tornado speed and intensity, there is every possibility that it will hit a top speed of 290mph (467kph) when it goes into production next year -- that's a whole 20mph more than the current Venom GT.

'We learned a great deal during the development of the Venom GT in breaking the 270-mph barrier, and we bring that experience to this new design as we look toward raising the performance bar even higher,' said company president and founder John Hennessey.

As such, the new car is a clean sheet design -- so much so that only the emblem on the carbon fiber hood will give those not in the know a clue as to its automotive bloodline.

And the aggressive new look isn't simply a fashion statement: the forces the car will need to overcome if it is to hit such phenomenal speeds mean that drag has to be reduced but downforce increased sufficiently so that it stays on the ground. And Hennessey claims that the new shape has cut the drag coefficient from 0.44 to below 0.40. 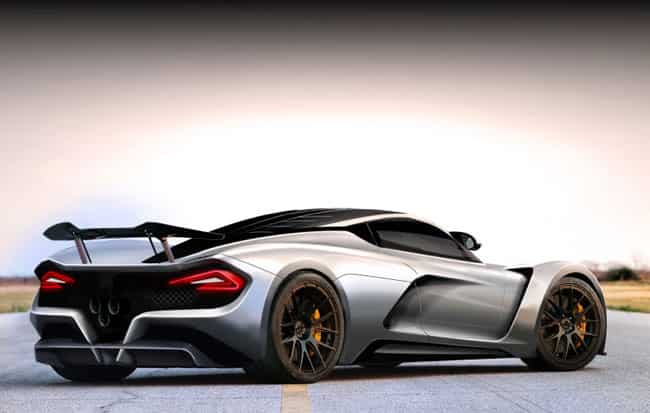 However, aerodynamics are just one part of a two-part equation. The car will also need a serious power increase. The Venom GT has an incredible 1244bhp to play with but the company will have to find as much as 200bhp more for the F5 if it is to comply with the laws of physics.

Hennessey is busy finding that extra power with new turbochargers and intercoolers and says that as a result, it can't offer hard numbers yet. But when the company isn't building its own supercars, it is busy taking those made by others and making them faster still, whether it's a Ferrari, McLaren or Ford GT. So the prognosis looks good. The current Venom GT has a 270mph top speed and a $1.2million price tag. Photo:AFP

The company is confident that the car will be officially unveiled in 2015 and that the first customer deliveries will begin in 2016. Like its predecessor, the Venom GT, the F5 will be built as a strictly limited series -- Hennessey is capping production at 30 cars.

And as for price, all it will say is that it will cost more than the GT, which currently retails for $1.2 million.