Home Auto News The Battle Of The Mini Suvs

The battle of the mini SUVs

Renault set the market on fire last year with its budget SUV. Ford ignited a debate with its own mini-SUV a couple of months ago. We pit the two head-to-head. Sumant Banerji reports.
By : Hindustan Times
| Updated on: 30 Aug 2013, 12:08 PM

The Renault Duster was an unqualified success of 2012. It opened up the compact SUV segment in India and was clearly the SUV of the year. So the Ford EcoSport is really the challenger to the throne here. Calling both an SUV is a stretch of imagination but in India even the government believes the SX4 is one. So we will not argue with the semantics and only poke our nose under the hood.

The pretty face or the one with the brawn?
Clearly the EcoSport is the pretty face here, in the conventional way. It is a sub 4 metre vehicle and despite the height does not look very domineering. Combined with the wraparound headlamps, high on chrome grille and a funky rear door cluster it is a design which will endear itself to the urban landscape. The Duster is more like what a conventional utility vehicle should look like. It is much more boxy than the EcoSport and much less quirky. It is also bigger and wider and clearly the one with the brawn.

Refinement over outright performance
While the Duster has two diesel engines at its disposal, EcoSport gets only one. Instead it gets two petrol engines. The rationale of that can be questioned but it does not make much of a differemce. Despite its bigger dimensions, the Duster is surprisingly light weight which aids its performance but what makes the Ford heavy is its abundance of features. Like the exterior, the two cars behave differently on the road. While the EcoSport with its silent cabin, ease of driving and low end torque is a decidedly better car in the city it isnt as accomplished a player on the highway particularly against the 110PS version of the Duster. Where the Duster falters is on the ride quality with its tendency to crash over potholes and bumps. 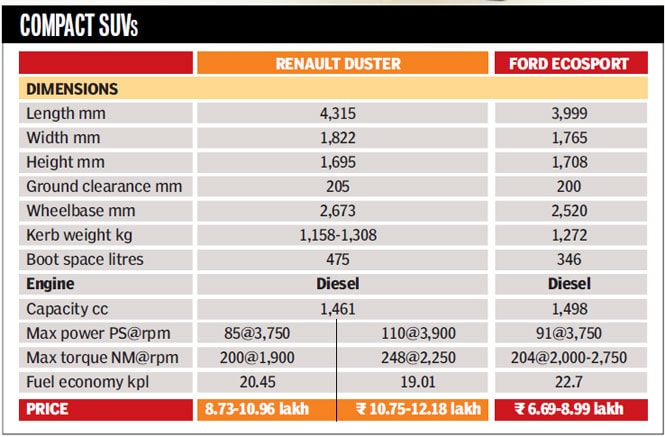 The one that ticks all the boxes
It is here that EcoSport wins hands down and despite Renault's best efforts to spruce the Duster up by including navigation and touch screen media interface, it falls way short. The Ford offers more safety with curtain airbags and emergency assist, more utility in terms of innovative use of interiors to store knick knacks and also more convenience with the key less entry system. The Duster has the bigger boot but it does not offer split seats at the back. The interiors of the EcoSport also feels two generations ahead of the Duster. If you are a sucker for features, you will not even look at the Renault.

Verdict
What works for the Duster? Its rough and rugged appeal. For a long time the Pajero continued to rule the roost even as other more powerful and equipped vehicles entered the fray as hardcore SUV buffs swore by it. The Duster has that swagger in a smaller format. It also stays true to that script with more power and performance at least with one of its engines. What tilts the game in favour of the EcoSport though is its killer price tag and gamut of features. For the price that you would pay for a bare bones base variant Duster, you can get a top of the line EcoSport.