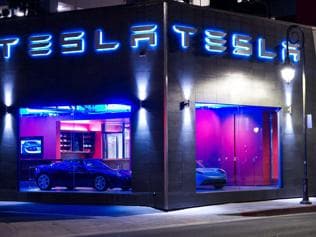 But production of the car, which at an estimated $35,000 would be half the price of the popular Model S, depends on Musk's group opening its new, multi-billion-dollar Gigafactory battery plant in Nevada by that time, he said.

'Model 3, our smaller and lower cost sedan will start production in about 2 years. Fully operational Gigafactory needed,' he said in a tweet.

The car will be unveiled in March 2016, and Tesla will begin taking preorders at that time.

Tesla currently only sells the Model S four-door sedan, but should begin releasing the long-awaited and heavily pre-sold Model X, a new gull-wing all-electric SUV, at the end of this month, Musk said.

Last week a high-performance version of the Model S, the P85D, earned the best marks ever given a car by the independent Consumer Reports group.

The car 'performed better in our tests than any other car ever has, breaking the Consumer Reports Ratings system,' said Mark Rechtin, automotive editor for the consumer group.

'Its significance as a breakthrough model that is pushing the boundaries of both performance and fuel-efficiency is dramatic,' he said.