Smart roads that talk to driverless cars under test in China

China's first national project for intelligent and connected vehicles has traffic lights and street signs embedded and other infrastructure includes sensors, cameras and radars that talk with vehicles.
By : Bloomberg
| Updated on: 14 Jan 2021, 08:52 AM 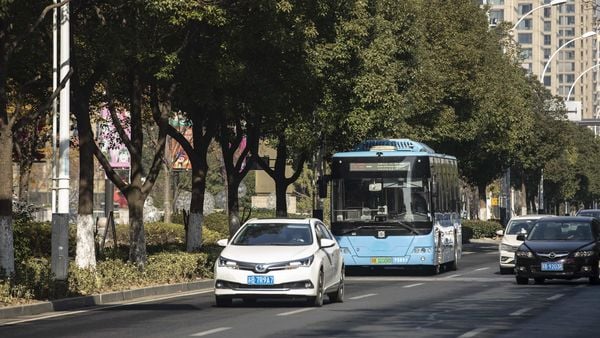 An autonomous bus, with a human safety driver, travels along a stretch of road being used as a test-site by Huawei.

The abstract concept of connected vehicles becomes easier to grasp at a test site in eastern China.

On a four-kilometer (2.5-mile) road in the city of Wuxi in Jiangsu province, a self-driving bus travels back and forth, making stops, swerving past obstacles, accelerating and decelerating, based on information it constantly receives from its surroundings. Embedded in the road, traffic lights, street signs and other infrastructure are sensors, cameras and radars that talk with the vehicle.

The site, used by telecom-equipment giant Huawei Technologies Co. and partners, is part of China’s first national project for intelligent and connected vehicles. The country wants to make traffic smoother and safer, while ensuring local champions like Huawei benefit from the enormous opportunity of supplying the infrastructure.

“Autonomous driving is an irresistible trend, but any isolated vehicle alone can’t nail it," Jiang Wangcheng, a president at Huawei’s information and communications technology business, said in an interview. “The only solution is to get more information from the roads."

Codenamed X-Bus, the vehicle is linked to a transportation-control network that sees and decides everything that happens on the test road. The communication is two-way: the bus constantly sends information to the network and can make requests such as favourable traffic lights to help it stay on schedule. Though the bus is largely autonomous, a human safety driver sits behind the wheel and is ready to take control if needed.

Shenzhen-based Huawei, with its main network business facing global pressure after the US designated it a threat to national security, is targeting new growth areas such as transport. Instead of making a smart car of its own -- billionaire founder Ren Zhengfei and other top executives have said that isn’t the intention -- Huawei wants to provide the communications equipment and software required for an intelligent-vehicle revolution.

While wide-scale use of such systems is still years away, technology companies around the globe are making progress. Amazon.com Inc’s Zoox won approval in September to test autonomous cars on public roads without a safety driver. News about Apple Inc. mulling over a self-driving car for 2024 sent its shares near record highs last month. Alphabet Inc’s self-driving cars have been roaming on American roads for years.

In China, autonomous cars from search-engine giant Baidu Inc. drive on the roads of Beijing suburbs. Chip startups such as Horizon Robotics and Shanghai Westwell Lab Information Technology Co are testing auto-driving technologies with the help of AI processors and algorithms.

China, the world’s biggest car market, wants smart vehicles with at least some automation to account for more than 50% of new auto sales by 2025, according to a national technology road map laid out in November. The plan also emphasized the need for infrastructure that allows vehicles to link to the internet and each other.

Increased safety is a focus -- currently one person is killed in a traffic accident in China every eight minutes. Huawei’s aim is for its technology to provide more accurate, real-time information to vehicles, drivers, pedestrians and other road users about traffic, weather conditions and potential hazards.

“Roads are supposed to serve the vehicles that run on them," Huawei’s Jiang said. “They need to provide more information to offer better support."