Saluto: A new Yamaha on the starting block 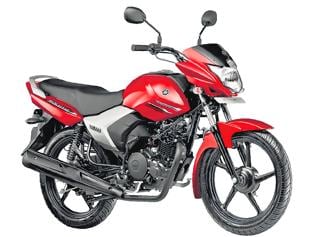 Not much of looker, but handles well

Into a biking India that is inching its way up in cubiccapacity from the customary 100cc, Yamaha recently threw the Saluto, a 125-cc commuter targeting the family man.

The Japanese company is popular in the country for its sporty 150-cc offerings and has quite a fan-following, but has struggled to get a strong presence in the more breadand-butter commuter segment owing to a market perception that all its bikes return poor fuel efficiency. Which is not really a fair appraisal, since it does not make any bones that the 150cc bikes are sportsters. But that is another story. 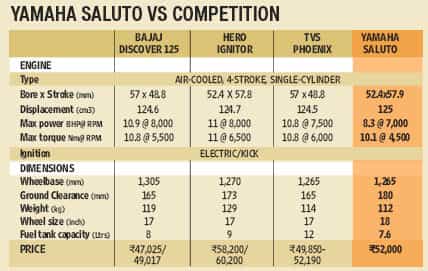 With the Saluto, Yamaha seems to be tipping a hat to the mileage-conscious family man, and - to quote its MD, Masaki Asano, "The new Saluto (offers) one of the best fuel economy performances in the 125cc class." The company claims a staggering 78 kpl fuel efficiency, thanks to a lightweight body (the lightest in the class at 112 kg).

Based on what the company calls the "blue core engine development ideal", the Saluto's engine has a combustion chamber that is more compact than previous 125cc models - also helping on the mileage front.

All that is very nice, but in a segment crowded with Hero Ignitor, Bajaj Discover, Honda Stunner, Suzuki, TVS… and two bikes from Yamaha itself, what does the Saluto bring to the road?

This was the question that bothered us when we took the bike for a spin in the Capital.

At the outset, the Saluto is not much of a looker. If anything, it is on the muted side, with a really small fuel tank adding to the self-effacing appearance. Built for the wife, not the girlfriend. The bikini fairing that is in fashion these days, and subtle graphics are the only concession to the times.

The seat is rather tall at over 805 mm, and with a straight-ish front-end, the bike pleases in manoeuvrability. The seat length is comfortable enough for a saree-clad pillion rider, and the shockers hold up well in both urban and rural conditions. The gearbox is fourspeed, with a heel shifter to save shoes of wear and tear. Like we said, targeting the typical commuter.

The 125cc engine is also pleasant, and though the bike we got to ride had just over 1,500 km on the clock, the throttle opened up without hesitation, and we could hit 85-90 kph easily. Once run in, 105 kph should be within reach, though the absence of a fifth gear will be sorely felt.

Which brings us to the whole purpose of this bike. With a nippy 125 cc engine, why does it not have five gears? It would only help the mileage equation, not detract from it. Moreover, with such a clean engine, why not offer, at least as an option, a front disc brake? It is not sufficient to just take off, one needs to stop as well, right? With a pillion, cruising at 80 kph, it would be silly to think one can stop a bike without substantial disc-assistance.

So, Yamaha, it would be nice if you could add some stuff to round off the package - a fifth gear, front disc brake, a sidestand alarm and an engine-cut switch would be great.

For the rest, the Saluto is a neat bike, and well worth a look-in if you are looking for an upgrade from 100cc. Don't forget the mileage!