While the cars' registration numbers were caught by CCTV cameras which then generated the hefty fines despite the fact that the cars were actually waiting in serpentine queues, the motorists have expressed their displeasure.Drive thrus of fast-food outlets in many cities have seen a lot of rush.
By : HT Auto Desk
| Updated on: 17 Jun 2020, 08:09 PM 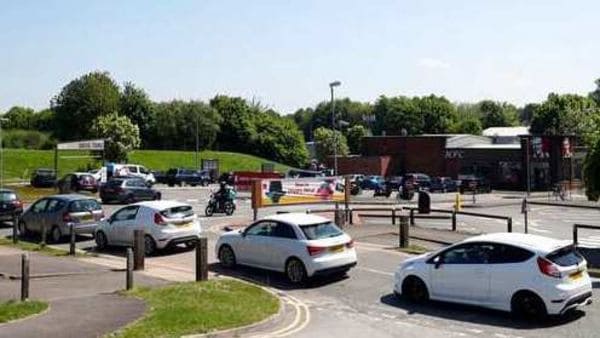 Drivers queue in their vehicles at a KFC restaurant in Basingstoke, Hampshire. (Image used for representational purpose)

That bite of 'finger lickin' good' chicken wings from KFC turned out to be one of the most expensive fast-food meals for many motorists in the UK when they were slapped with £100 fines for keeping their vehicles 'parked too long' in the crowded drive-thrus of the restaurant chain.

And they are obviously fuming.

UK's Mirror recently reported that many motorists were issued parking charge notice (PCN) for waiting longer than 75 minutes to get a chance to reach KFC drive thru order counters. While the cars' registration numbers were caught by CCTV cameras which then generated the hefty fines despite the fact that the cars were actually waiting in serpentine queues, the motorists have expressed their displeasure. "Once you're in the queue, you can't get out of it. The cars were bumper to bumper," one such person was quoted as saying. "There was a security guard bringing people into the car park and there was no mention of there being a time limit and a possible fine."

Many of these motorists have taken to social media channels to vent their frustration while some of them have challenged the fines which can be reduced to £60 if paid within two weeks from the date of first issue.

Fast food outlets in the UK and many other parts of the world have seen mile-long lines of vehicles outside drive-thru outlets after lockdown restrictions were lifted. And even though restrictions have been lifted, or at least eased, restruants in many cities are not permitted to serve food in-house which means takeaway and drive-thrus are seeing the bulk of customers. This, in turn, has led to instances when vehicles spill over to main roads and pose a serious risk to the movement of other vehicles.

Law enforcement officers in many cities are now taking note of such instances and are urging people to not crowd fast food outlets, even if they are in their vehicles. Outlets like McDonalds and KFC are also urging customers to place their orders through mobile applications before reaching the outlets so that the process can be quickened.